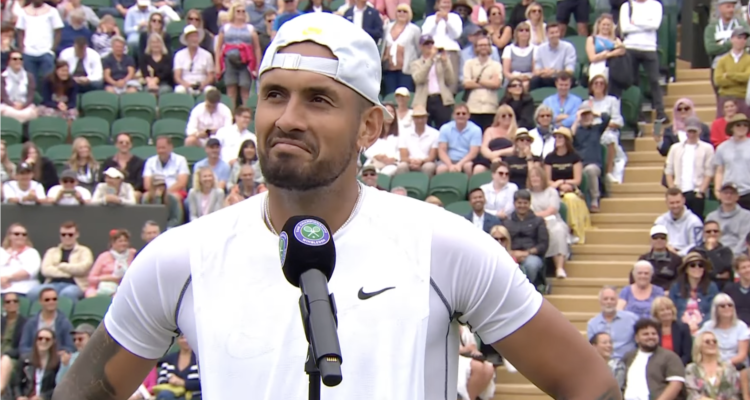 Australian tennis player Nick Kyrgios is making news after his first-round match in Wimbledon, but it isn’t because of his victory though. During the match, Kyrgios actually spat in the direction of a fan he felt was behaving in a disrespectful way.

Things started off normally as Kyrgios faced off against his British opponent Paul Jubb, but things escalated quickly as the match became more intense. While Kyrgios would probably rather people talk about his razor thin win (6-3, 1-6, 5-7, 7-6 [3], 5-7), instead the press is covering is immature behavior on the court instead.

First off, early in the match Kyrgios got into a verbal argument with a line judge, calling the person a “snitch.” Later, as if things couldn’t get worse for him, he demanded that an audience attendee who he claims heckled at him be removed from the game.

That’s not all though; Kyrgios decided asking that the heckler to be removed wasn’t enough so he decided to spit at the man after he had won the match.

“Today, as soon as I won’t the match, I turned to him [the heckler],” said Kyrgios during an interview after the match. “I’ve been dealing with hate and negativity for a long time, so I don’t feel like I owed that person anything.”

“He literally came to the match to literally just, like, not even support anyone really,” he continued. “It was more just to stir up and disrespect. That’s fine. But if I give it back to you, then that’s just how it is.”

Kyrgios is known throughout the professional tennis community for his raging temper and outbursts, not to mention the thousands of dollars he’s been fined on the court because of his behavior.

He smashed two racquets and spat at an umpire before calling him a "f**king tool." So is enough is enough when it comes to Nick Kyrgios’ bad behaviour? pic.twitter.com/EEEoxZWV68

“I’m okay with receiving a lot of it [heckling]. What I don’t understand is as soon as I give it back, for instance in Stuttgart I gave it back, and I got a game penalty,” Kyrgios added.

During this year’s Australian Open, Kyrgios accidentally hit a young boy sitting in the stands with a ball. To his credit though, the kid didn’t take it too personally and Kyrgios went ahead and gifted him with his racket.

This is 9-year-old Fin Crane! Thankfully, he’s all ok after getting accidentally cleaned up after errant ball flew into the crowd at the Kyrgios/Kokkinakis match – @NickKyrgios made sure he goes home with a nice souvenir! What a little legend #AO2022 pic.twitter.com/VntUaJa0T7

What do you think of Kyrgios’ behavior on the court?