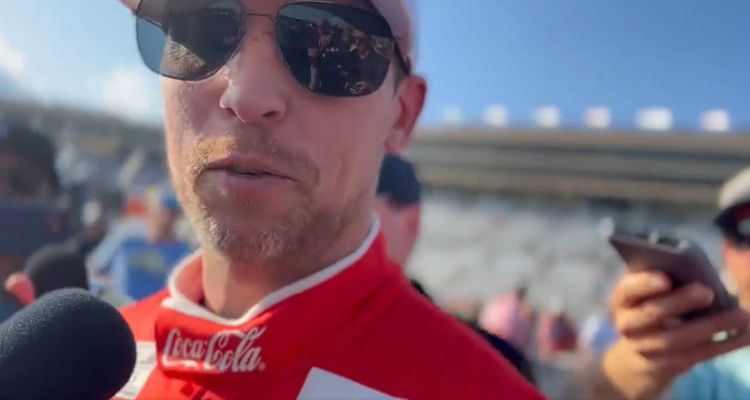 Ross Chastain is not making friends out on the track and he made another enemy in Austin Dillion during Quaker State 400 at Atlanta Motor Speedway on Sunday.

Chastain got into the rear of Martin Truex Jr. spinning him around as he attempted to push him to the front of the field.

The wreck would collect numerous cars including Austin Dillon who slammed hard into the outside safer barrier wall. Joey Logano, Kyle Busch, Kyle Larson, and Michael McDowell would also be collected.

After a visit to the infield care center, Dillon had some strong words for Chastain saying, “I’m all good. Thank the good Lord above. Actually the hits weren’t that bad at that impact. My belt got me pretty good near the groin there.”

He then turned his ire toward Chastain, “Unfortunate our weight got our car better right there. Looked like were a casualty of Ross Chastain once again.”

While watching the footage of his car impact the wall he commented, “Ooh. That was a pretty good lick there.”

Later in the interview, Dillon stated, “I told myself we’re gonna race hard all day. It wasn’t one of those things that I wanted to ride in the back and be there in the end. But when you got guys like him out there wrecking half the field, you might as well actually take a different strategy sometimes.”

“But it’s a lot of fun, the racing. The cars are hard to drive and you got to make them drive better when its hot like this. I thought we did a good job making my car get to the bottom and kind of making some headway and then got caught up in the wreck,” he concluded.

On Twitter, Dillon simply stated, “Not the day we wanted.”

Dillon wasn’t the only victim of Chastain’s aggressive driving. Chastain would also spin out Denny Hamlin later in the race.

The Trackhouse driver drifted up the track and ran straight into Hamlin’s left rear quarter panel. The contact sent Hamlin spinning across the track collecting Brad Keselowski in the process.

Hamlin and Chastain are no strangers to each other. The two’s rivalry had seemingly reached peak level after Chastain spun Hamlin at the Enjoy Illinois 300 at World Wide Technology Raceway back in June.

Chastain purposefully drove into the rear of Hamlin sending #11 car around and crippling his car for the rest of the day.

Despite his car being crippled, Hamlin was able to continue the race and he would plague Chastain the rest of the day attempting to block him and slow him down every time he was near him.

Following the race at World Wide Technology Raceway, Hamlin promised revenge telling Fox Sports’ Bob Pockrass, “You’ve just got to fence these guys hard just to kind of get their attention. It’s going to have to be meaningful, on a meaningful day.”

Denny Hamlin said when he pays back Ross Chastain, it will be meaningful and when he least expects it, that you have to “fence these guys hard” to get their attention.

More of what Hamlin said about Chastain after Gateway: pic.twitter.com/B0SCkCct6r

After being spun out at Atlanta, Hamlin reiterated his promise. When asked at what point the line has been crossed too many times, Hamlin answered, “It’s just all in whatever level I’m willing to take. It’s just another unfortunate circumstance for him.”

Hamlin would then be asked if Chastain stands a chance at winning the championship due to upsetting so many drivers. He replied, “I don’t know. I think it’s just everyone has their different tolerance levels, certainly. But you guys know I’ve reached my peak.”

When asked what he would do about it, Hamlin responded, “It all works itself out in the end.”

#NASCAR … Denny Hamlin on contact from Ross Chastain in the race: “Everyone has their different tolerance levels … I’ve reached my peak.” pic.twitter.com/atuso6S5iq

What do you make of Ross Chastain’s driving? Do you think he stands a chance to win the championship while pissing off so many other drivers?