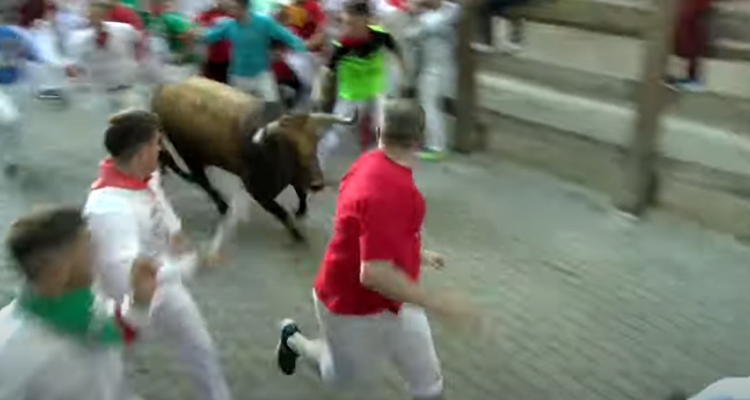 WATCH: Man Gets Tossed Around Like A Rag Doll By An Angry Bull During Running Of The Bulls In Spain

Multiple people were gored and trampled during the running of the bulls in Pamplona, Spain with one man being turned into a human rag doll by one of the bulls.

If you are unfamiliar with the Running of the Bulls it is part of the San Fermin Festival and is described by The Running Of The Bulls website as “one of Spain’s most celebrated traditions” where it takes place between July 6th and July 14th every year.

It further details “the bull runs start at 8 o-clock each morning during the fiestas of San Fermin, as six fighting bulls dash through the cobblestone streets, along an 875-meter course. The bull runners, known locally as “mozos,” wear the traditional white uniform accented with a red scarf and belt.”

Following the bull run, the bulls are killed at 6:00 p.m. during the Bullfights in the Plaza de Toros. However, the site notes, “particularly brave bulls may be pardoned by the audience, allowing them to live as sementar to perpetuate a great race of bulls and to die a natural death.”

A CBS News report notes that on the fifth day of the San Fermin Festival that “three people were gored, several more trampled, and at least six runners hospitalized in Monday’s run.”

Scott Schneider from Austin, Texas participated in the bull run noting he was indeed afraid of the bulls saying, “Heck yea I was afraid, man. It was a lot of fear coursing through my blood. But now I feel relief and I’m going to get drunk.”

The full run for the fifth day can be seen below and around the :47 second mark one person is knocked down and then trampled by a number of the bulls.

At the 1:09 mark another person falls down perpendicular to the street and is quickly run over by two of the bulls. The chaos continued with the bulls trampling more people who were knocked over by their fellow runners.

At the 2:17 mark one of the bulls pulls a U-turn and puts his horn right into a runner who falls on top of him.

The runner then gets tossed around like a rag doll by the bull. Chaos then ensues as the bull takes out multiple runners and creates a road block allowing his fellow bulls to stomp over multiple people.

When the bulls enter Plaza de Toros, one of them appears to attack multiple people on the edge of the arena. However, a bull fighter with a cape quickly distracts it and it leads it away.

One man in a yellow shirt is on the verge of getting gored, but somehow appears to only get headbutted rather than facing the bull’s horns. He then quickly gets out of the bulls’ path.

At one point during the run, a bull appears to knock down multiple people as they collapse on the cobblestone street.

On the second day, one man gets knocked down by a fellow runner as he attempts to flee from the bulls. After getting knocked down he’s run over by a giant white bull and a smaller black bull.

As the bulls run past him he curls up in the fetal position, but is then hit by a second wave of bulls with one appearing to stomp him in his head.

Shortly after mauling this individual, the bulls round a corner and come across multiple people who have fallen down in their path and they are quickly crushed under the weight of the enormous beasts.

Day 3 saw one bull leading the charge decide to lower his horns and spear a runner wearing a striped shirt, driving him into a building and knocking him onto the cobblestone street. The bull then trampled him underneath his hooves before continuing his charge.

At around the 1:36 mark, one man is knocked down a fellow runner right in front of a big black bull who proceeds to run him over without a thought. Shortly after that another man is tracked down by the bulls. The bull uses his head and drives him to the ground with the man not having anywhere to escape to. He’s then stomped on by the bull and barely avoids a second bull spearing him in the cranium.

On Day 4 shortly after the bulls began their charge they run over a man who has lied down directly in their path. The bulls all appear to actually avoid stomping on him as they jump over him.

What do you make of the Running of the Bulls in Pamplona, Spain?

NEXT: Watch: Collapsing Bullfight Stadium Results In Hundreds Of Injuries And Four Deaths