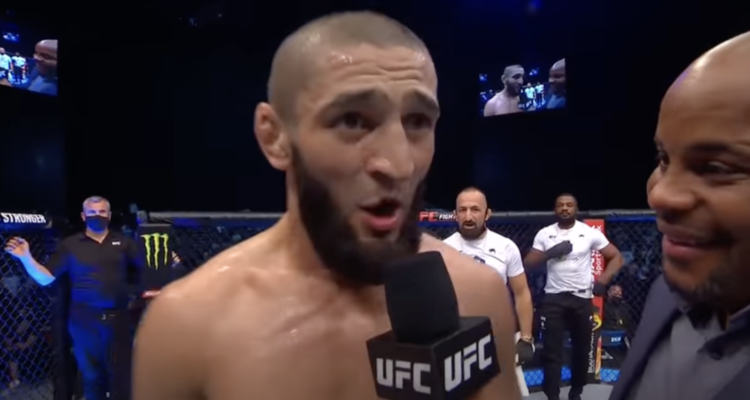 Khamzat Chimaev On Facing Nate Diaz At UFC 279: “I Kill Him, You Know, And Kick Him Out”

We’re getting closer and closer with each passing day to UFC 279, which will feature underdog Nate Diaz against Khamzat Chimaev. While this fight will absolutely define the legacy of Diaz’s MMA career, Chimaev doesn’t seem too worried about facing his former UFC role model in the octagon.

“Yeah of course [I’m surprised Diaz took the fight], because like, himself he tells the interviews [this is a] bad match up for him, you know?” said Chimaev, who spoke exclusively with reporter Oscar Willis from TheMacLife ahead of his bout with Diaz on September 10th.

“Like I can smash that guy easy,” Chimaev continued. “The guy’s getting older, he’s not that guy who beat McGregor. He’s not that young guy. This is his last fight, he’s gonna lose this fight and go some boxing s**t.

With that said though, Chimaev isn’t implying that the outbound fighter Diaz won’t put on a show. “I think all the fights can make you surprised,” he said. “Like my last fight, I made mistakes. I was like, ‘Now I drop him, now I’m gonna knock him out.’ I run after him like three rounds, it didn’t happen.”

He continued, “Sometimes you have to be ready, like fight rounds, for ten rounds. It doesn’t matter. I was ready, you know? I get dropped, it’s why I get up I come up and finish the guy. We were watching each other, watching running around.”

Chimaev does note this is all business and nothing personal, “Yeah of course it’s nice to fight with that guy [Diaz].”

“When I was a young kid, young boy, I looked up to that guy, other guys. It’s nice to see them in the cage as well with me,” he said. Like somebody you looked up [to].”

He did praise Diaz saying, “He’s a warrior. Nobody can take from him. He comes to fight until the last second. Like he said always, kill or to be killed. He’s doing all the time. Respect for him to take the fight, it’s a bad fight for him. You have to give him respect.”

Nevertheless at the end of the interview Chimaev was asked if he will smash Diaz on his way out of the UFC.

He answered, “Of course, UFC. I’m like killer. They pay for me, I kill somebody. I will do my job.”

After the main event between the two fighters was announced, commentators and critics began to question whether the match up between the two was fair, especially when you look at the fact that Diaz lost his last several matches and hasn’t fought in over a year. Rumors swirled for a while that Diaz would face a more equal opponent such as Dustin Poirier or Vicente Luque for his last fight, but when it was announced that he would face Chimaev, that took many by surprise.

“It’s fair,” said UFC President Dana White at a recent press conference. “I don’t ever do that s**t but it’s fair to say if he wins that one, that’s the fight to make.”

“By the way, I did a bunch of media today and everybody’s counting Nate Diaz out. It’s just like people counting Leon Edwards out. You can’t count anybody out,” White continued. “In this sport, man, you never know what’s going to happen. Anything is possible.”

What are your thoughts on this fight? Will Diaz win and end his UFC career on a high note or will this be the “funeral” that Chimaev has promised it will be?

NEXT: The Top 5 Fights The UFC Needs To Make Happen Before The End Of The Year