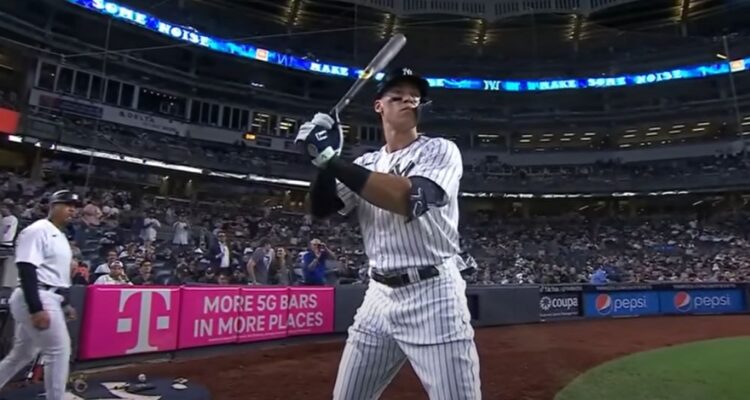 New York Yankees Slugger Aaron Judge Explains How He Tries To Live His Life: “Always Trust The Man Above And What He’s Got In Store For Us”

New York Yankees slugger and right fielder Aaron Judge, who is on the cusp of breaking the American League home run record set by Roger Maris back in 1961, recently explained he tries to live his life by putting his faith in God.

Judge spoke with Daily Citizen where he revealed one of his favorite Bible verses is 2 Corinthians 5:7, which is “For we walk by faith, not by sight.”

The verse is actually his banner photo for his Twitter profile.

Not only did he reveal it was one of his favorite Bible verses, but he explained he tries to live his life by it,”[I] try to live my life by it, and always trust the Man above and what He’s got in store for us.”

“We never know what’s around the corner, but if we have faith in Him, He will lead us in the right direction,” he added.

Not only is Judge trying to live his life by the verse and put his trust in God, but he also recognizes that all his accomplishments come from God.

Back in 2014 he wrote on Twitter, “God gave you the talent, so always give Him the glory! Never forget that God gave you this opportunity!”

To that end he also knows to put God before yourself responding to a tweet from Athletes4Him writing that stated, “God > your problem. God’s timing > your timing. God’s plan > your plan.”

In that same vein, he recognizes that not everything will go your way and that there will be hardships in life, but he noted in July 2013, “God gives his hardest battles to his strongest soldiers.”

When asked why does God allow demonic possession, Fr Ripperger answered in part, “The reason why demons are allowed to inflict people is that ultimately they’re the instrument of our sanctification.”

He went on to explain, “God allows them into our life because by having to combat them we attain a level of virtue and sanctity that we wouldn’t. We would just be mediocre spiritually a lot of times.”

Judge has currently hit 60 homeruns this season with his 60th coming against the Pittsburgh Pirates on September 20th.

No. 60 ties The Sultan of Swat for 2nd all-time in American League history!@TheJudge44 👨‍⚖️ pic.twitter.com/DNwFXsJFMC

What do you make of how Judge tries to live his life? Do you think Judge will be able to tie and/or break Maris’ home run record?

NEXT: Former Los Angeles Angels Manager Joe Maddon Believes Analytics Is Taking Over Baseball: “Their Impact Or Authority Is Exceeding That Of A Coach”