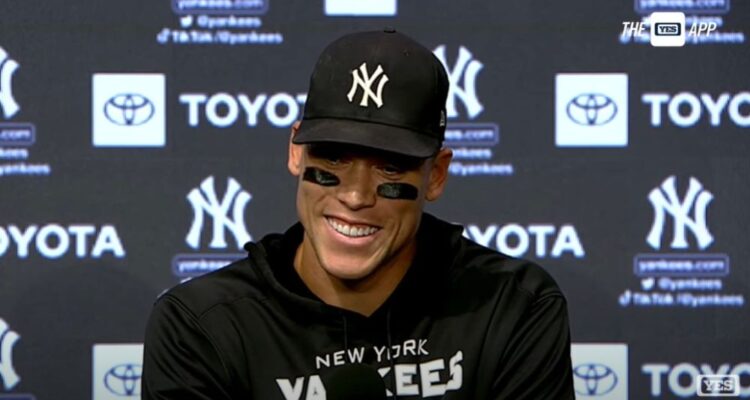 Fan Who Caught Aaron Judge’s 62nd Home Run Ball Unsure What He Will Do With It, Judge Says He’d Like It Back

Aaron Judge hit his 62nd home run of the season in the New York Yankees’ loss to the Texas Rangers on Tuesday.

The home run gives Judge the American League record for most home runs in a season besting Roger Maris, who previously held the record with 61 that he set all the way back in 1961.

According to MLB Network’s Jon Morosi the ball landed in Section 31, Row 1, Seat 3 of Globe Life Field. The man who caught the ball, later identified as Corey Youmans was escorted by security to an unidentified location in the stadium to authenticate the ball and have it officially dedicated.

Youmans informed a number of press outlets that he didn’t know what he was going to do with the ball.

When asked, Youmans said, “That’s a good question. I haven’t thought about it.”

Bold strategy from this fan absolutely sending it off the wall for the Aaron Judge ball that landed about 10 seats away pic.twitter.com/PF34Qg1hb0

After the game, Judge revealed he did not get the ball from Youmans, but said he would like to have it.

When asked if he’d gotten the ball, Judge replied, “Not yet. I don’t know where it’s at. We’ll see what happens with that. It’d be great to get it back, but that’s a souvenir for a fan. They made a great catch out there and they’ve got every right to it.”

Judge also noted that his most memorable part of his chase for the home run record was the fans.

He explained, “The fans at home. The fans on the road. The constant support. Seeing Yankee Stadium on their feet for every single at bat. They are booing pitchers for throwing balls, which I’ve never seen before. I think I got a base hit the other night and I was getting booed for a single. Little moments like that you look back on.”

What would you do if you caught Judge’s 62nd home run?

NEXT: New York Yankees Slugger Aaron Judge Explains How He Tries To Live His Life: “Always Trust The Man Above And What He’s Got In Store For Us”