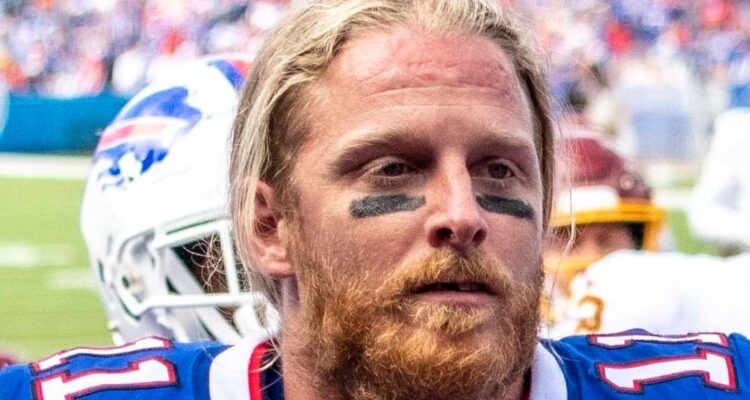 Cole Beasley Rips The Brooklyn Nets After They Suspend Kyrie Irving, Questions If Amazon Will Get Cancelled Too

Cole Beasley, who recently retired from the NFL after 11 years in the league with the Dallas Cowboys, Buffalo Bills, and Tampa Bay Buccaneers, recently weighed in on the Brooklyn Nets suspending Kyrie Irving for simply posting a link to a movie that is publicly available to purchase on Amazon.

The Nets indefinitely suspended Irving for sharing a link to the film Hebrews to Negroes: Wake Up Black America The Movie to his Twitter account.

This tweet led many to attack Irving as anti-Semitic or imply that he was pushing anti-Semitism to his followers. Nets owner Joe Tsai even joined those attacking him.

Tsai tweeted, “I’m disappointe dthat Kyrie appears to support a film based on a book full of anti-semitic disinformation. I want to sit down and make sure he understands this is hurtful to all of us, and as a man of faith, it is wrong to promote hate based on race, ethnicity or religion.”

He added, “This is bigger than basketball.”

When asked by the media, “Do you have any anti-Semitic beliefs,” Irving replied, “Again, I’m going to repeat. I don’t know how the label becomes justified because you ask me the same questions over and over again, but this is not going to turn into a spin around cycle of questions upon questions. I told you guys how I felt. I respect all walks of life and embrace all walks of life. That’s where I sit.”

This response led to the Nets suspending him. The team released a statement announcing the suspension, which reads, “Over the last several days, we have made repeated attempts to work with Kyrie Irving to help him understand the harm and danger of his words and actions, which began with him publicizing a film containing deeply disturbing antisemitic hate. We believed that taking the path of education in this challenging situation would be the right one and thought that we had made progress with our joint commitment to eradicating hate and intolerance.”

Beasley reacted to the suspension sharing on Twitter, “Won’t miss this part of professional sports. ‘Be you’ they say. Yea alright…”

Beasley would then respond to a number of replies that attacked him.

To one user who has since deleted their tweet, Beasley wrote, “People should be able to say what they want. You don’t have to listen to them and everything they say isn’t the truth. Stop being so damn sensitive.”

Former Sports Illustrated writer Tony Posnanski would attempt to gotcha Beasley by asking, “So you are saying you are glad to be out of sports now so you can finally share your hatred of Jews, Cole?”

Beasley blew up the disgusting question and implication responding, “No I’m saying just because somebody watched a film doesn’t mean they hate Jews. Lol I’ve watched a lot of films I don’t agree with.”

Numerous other Twitter users attempted the same tactic as Posnanski, but Beasley handled them deftly. He responded to one user who wrote, “Be u does not mean u should peddle lies and misinformation cole….there I just fixed it for ya.”

“S** nothing but lies were peddled all last year and I got fined for it cause I didn’t believe them. Do people still believe you can’t get Covid if you’re vaxxed?”

Another attempted to imply that he was a racist. Beasley responded, “You didn’t find out anybody was racist. You just assumed it.”

Still another tried to paint him as an anti-Semitie. He replied, “I didn’t say all that. I just don’t think him posting the documentary is worthy of a suspension.”

Beasley also questioned why the Brooklyn Nets and the media are not trying to cancel Amazon given the link Irving shared to Twitter was on Amazon.

He wrote, “Is Amazon getting cancelled too or nah?”

Irving did issue an apology on Instagram. He wrote, “While doing research on YHWH, I posted a Documentary that contained some false anti-Semitic statements, narratives, and language that were untrue and offensive to the Jewish Race/Religion, and I take full accountability and responsibly for my actions. I am grateful to have a big platform to share knowledge and I want to move forward by having an open dialogue to learn more and grow from this.”

What do you make of Beasley’s comments regarding the Nets’ suspension of Kyrie Irving?