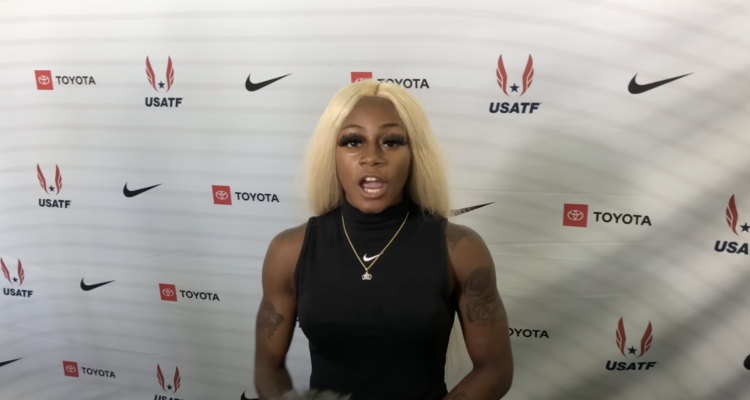 Track and field star (and one time Olympic-hopeful) Sha’Carri Richardson’s weekend didn’t go as planned. In what should have been a breeze for her, 22-year-old Richardson failed to qualify for the finals for the 100m and 200m dashes.

So what did Richardson do afterwards? Apologize to her fans? Take accountability for her failings? Go quiet online in order to take some time for some serious self-reflection?

No, she decided to literally do the opposite of all of that by going live on Instagram in what can only be described as a shameless and confusing retort.

Sha'Carri Richardson spreads her legs to send a message to her haters… pic.twitter.com/zmaUMGT8Nq

This “display” by Richardson is only one chapter in her history of embarrassing antics. In 2021, she was suspended from the Olympics for testing positive for marijuana. Since then, things haven’t been any better for her, with this weekend’s failures now just adding onto her list.

Before her bizarre Instagram livestream, Richardson approached the media in the mixed zone after failing to qualify, and attempted to play victim by accusing the media of unfair treatment of how they cover athletes instead of just accepting that she failed to qualify because she failed to come prepared.

“What I have to say – y’all can all take this interview and do whatever you want to do with it,” said Richardson. “I’m coming to speak not on just my behalf but all athletes’ behalf.”

Sha’Carri Richardson just came through the mixed zone at USAs and asked for media to treat athletes with more respect and thoughtfulness in post-race interviews. She did not take questions. pic.twitter.com/tTF06HgIMJ

“That when you guys do interviews, y’all should respect athletes more,” Richardson continued. “Y’all should understand them coming from whether they’re winning, whether they’re losing, whatever the case may be… athletes deserve way more respect than when y’all just come and throw cameras into their faces.”

She didn’t stop there, Richardson told the reporters to “Understand how an athlete operates and then ask your questions. Then be more understanding of the fact that they are still human, … Y’all just trying to get something to put out an article to make a dollar. Thank you.” She walked away after finishing and did not take any questions.

What’s your take on Richardson’s behavior?