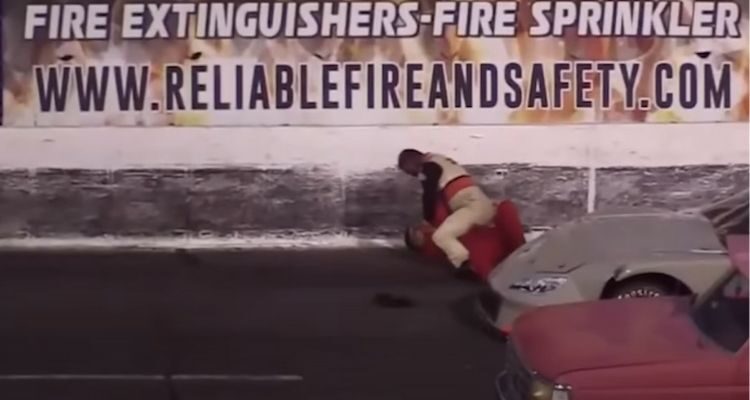 Fight Breaks Out After Big Wreck At Hickory Motor Speedway

A brief fight broke out following a huge wreck during the 4 Cylinders division at Hickory Motor Speedway on June 25th.

As the green flag flew for the 4 Cylinders division at Hickory Motor Speedway, the #11 of Robert Trivette appeared to have an issue on the start and he allowed the #6 of Brian Mundy to get a huge jump on him going into turn 1.

Trivette then appeared to correct the issue going into turn 2 and coming onto the back straight away, but Curtis Pardue in the #17 would drift up the track and collect Trivette sending him spinning around and crashing hard into the outside wall.

Following the wreck, Trivette exited his car and quickly raced up the track and had words with Pardue. One of Trivette’s crew members then appears to enter the track and break up the confrontation. However, Trivette then turns his attention and appears to tell him to get off the track.

The two would eventually walk back down the track to their car allowing Pardue to exit his vehicle.

Once Pardue exited his vehicle, Trivette decided to tackle Pardue.

However, things didn’t go as planned for Trivette as Pardue quickly turned the tables and put Trivette on his back and then preceded to sit on him while giving him a piece of his mind.

Pardue would eventually get off of Trivette once a track official arrived to break it up. However, Trivette’s crew member would then confront Pardue, but he quickly backed down when Pardue began winding up his right arm.

As Pardue began to walk away, Trivette finally got up and began yelling and pointing at Pardue again.

Trivette attempts to tackle Pardue, gets sat on. pic.twitter.com/tLWxcmYb04

The craziness didn’t end there. A few moments later, as Trivette walks back into the pits, law enforcement officials pull Trivette’s crew member who had just gotten chased off by Pardue out of a hauler and escort him to their vehicle in handcuffs.

The race would eventually get back under the green flag and Brian Mundy would take home the win after a late race challenge from Tim Canipe in the #10. Rodney Trivette would finish in third with Robert Trivette claiming the fourth spot and Pardue the fifth following the wreck.

After the race, Rodney Trivette scolded track officials saying, “I don’t know what’s going on with Curtis and Brian. They take my brother out every week. It’s just stupid.”

He continued, “You got track people that run this place that let this stuff go on week in and week out. We have to rebuild new cars every week for no reason. And they let them continue to keep doing what they are doing. And then the police down here want to harass us. It’s getting old.”

“I, as a driver, I could have took out that 6 car and I could have killed whoever was over there because I could have drove straight through them. But, no, I’m not going to do that because that ain’t how you handle it. You handle it by outrunning people,” he went on.

Trivette concluded by seemingly promising to destroy both Mundy and Pardue’s vehicles, “And they get pissed off because they get outrun and they want to take you out. I’m tired of it. It will not happen anymore. I can guarantee you new cars will be built on the #6 and the #17. Guaranteed.”

The incident made FloRacing’s COMP Cams Top 5 Moments for the week. You can view the rest here:

You can catch all the action at Hickory Motor Speedway throughout the season via FloRacing.

What do you make of the fight between Trivette and Pardue? Who do you think was in the wrong? What about Rodney Trivette’s threat to seemingly destroy Pardue and Mundy’s cars?

NEXT: WATCH: Wild Wreck Takes Out Nearly The Entire Field In The First Leg Of The Virginia Triple Crown