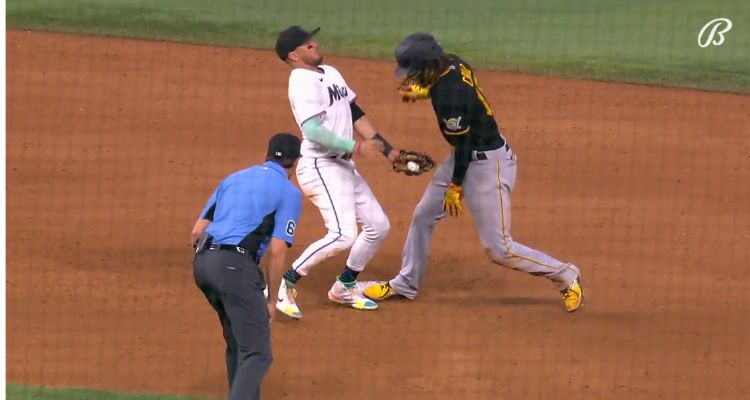 Florida Marlins’ second baseman Miguel Rojas saw his tooth fly out of his mouth following hard contact from the Pittsburgh Pirates’ Oniel Cruz who was attempting to steal second.

In the 9th inning of the game between the Florida Marlins and the Pittsburgh Pirates, Cruz attempted to steal second base.

His attempt would be unsuccessful, but as he slid into the base, he also raised his head upwards with his helmet catching Rojas on the chin and sending his tooth flying from his mouth.

RELATED: Phillies Catcher J.T. Realmuto On Missing Games Against Toronto Due To His Vaccination Status: “I’m Not Going To Let Canada Tell Me What I Do And Don’t Put In My Body”

Slow motion replay allows you to see Rojas’ tooth come flying out of his mouth as he lifts and turns his head away from Cruz. He then quickly puts his hand to his mouth and doubles over in pain.

Miggy Ro gets popped by Oniel Cruz’s helmet and has to leave the game. pic.twitter.com/8ZOW0fGXNe

A member of the Marlins’ medical staff would later remove the tooth from the field.

Rojas would leave the game due to the injury.

He would not be the only Marlins player to suffer physical injury during a play. Center fielder Billy Hamilton collided with Pirates catcher Jason Delay in the bottom of the fifth inning while scoring a run.

Billy Hamilton hustles around the bases, and the @Marlins take the lead after replay review. But Hamilton has to be helped off the field after the collision at home. pic.twitter.com/dW9uI3p2ok

In a post-game interview, Hamilton’s eye was clearly battered during the play. He toughed it out explaining, “I’m making it. I mean I don’t look too good with this right here (pointing to his eye), but it’s something that’s part of the game.”

“It was just gotta do what I can to help this team. Like I said, we got a great team over here. Coming into home right there in that situation just something that my shoulder is bothering me, but it be fine today when I get home.”

RELATED: White Sox Pitcher Liam Hendriks Claims “Protection Isn’t A Good Enough Reason To Get A Gun” In The Wake Of The Highland Park Shooting

While Hamilton’s face was battered he did explain that the collision affected his shoulder more than his face. He detailed, “It’s my shoulder. My face, I can deal with that. It’s just a couple of scratches and bruises. But my shoulder kind of moved around once I slid in there and I tried to get around his shin guards and everything.”

“But that’s just something that I can fix in the training room and everything. So I’ll be fine,” he concluded.

“Gotta do what I can to help this team.”

Billy Hamilton talks about putting his body on the line Thursday after the @Marlins win over the Pirates. #MakeItMiami pic.twitter.com/mIMC82xZ66

The Marlins would end up winning the game in the 11th inning defeating the Pirates 3-2 and improving their record to 43-45.

They are currently 4th in the National League East behind the Mets, Braves, and Phillies.

What do you make of the collision between Oneil and Rojas? What about Hamilton’s collision with Delay?