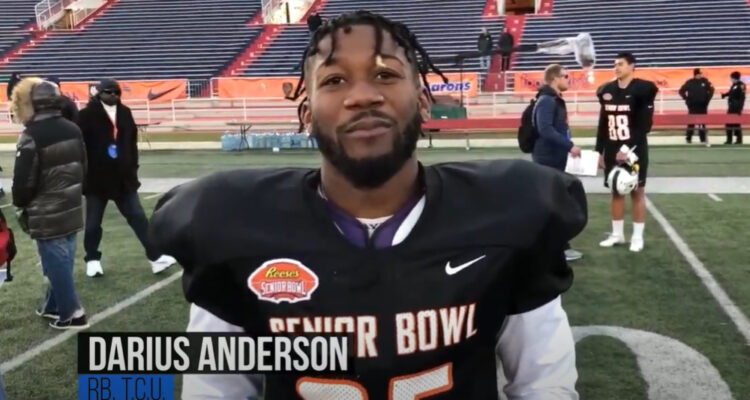 Houston Texans running back Darius Anderson was arrested for burglary with intent to commit assault.

Anderson is currently part of the Texans’ practice squad and joined the team in December 2021 after spending time with the Indianapolis Colts and the Dallas Cowboys.

Initial reporting from Pro Football Network’s Aaron Wilson indicated that Anderson was charged with “burglary with intent to rape” as noted by Harris County Court records.

Wilson tweeted, “Texans running back Darius Anderson, a former George Ranch standout and TCU football player, has been charged with burglary with intent to rape, according to Harris County Court records.”

He then shared a screenshot of those court records that shows the offense is “BURG W-INTENT RAPE.”

However, Wilson recently shared that Houston Police informed him that Anderson has actually been charged with burglary with intent to commit assault. He further noted that the original charge was a coding error.

According to Wilson, the Houston Texas also issued a statement in response to Anderson’s arrest.

It reads, “We are aware of the report involving Darius Anderson. We are gathering information and have no further comment at this time.”

Fox News reports that “Anderson, 24, allegedly broke into the Houston home and pursued a woman into her bathroom and later the woman called police from the bathroom.”

They also report, “He’s now barred from visiting the victim’s home and from possessing a firearm.”

TMZ Sports further notes the woman was Anderson’s ex-girlfriend and that he forced his way into her home through the garage. She fled from him to the third floor and locked herself in a bathroom, but not before she fell on the stairs and hit her should and chest.

While in the bathroom, she told police that Anderson yelled at her “that he was ‘going to beat her up.'” He reportedly left the home when he heard that she was on the phone with police.

Further, the woman also allegedly told police that Anderson “has hit her in the past.”

What do you make of Anderson getting arrested?