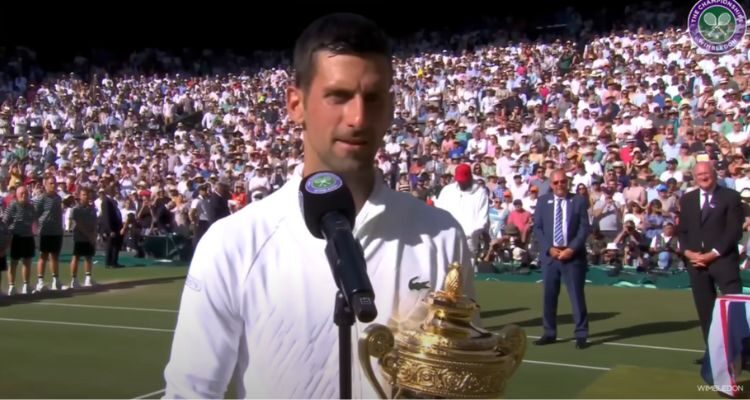 Tennis legend John McEnroe blasted politicians and bureaucrats for not allowing one of the greatest tennis players ever, Novak Djokovic, from competing in the upcoming US Open over his vaccination status.

The championship puts Djokovic one title behind Rafael Nadal for the all-time men’s tennis majors total at 21. Sadly, due to Novak’s vaccination status, he will not be allowed to compete in his next opportunity at a major, the US Open as things stand.

Djokovic confirmed he has no plans to receive the COVID-19 vaccination and will not be playing in the US Open unless the restrictions to enter the country are eased or he is given a medical exemption.

During the pre-tournament press conference for Wimbledon Djokovic was asked if he completely ruled out getting vaccinated. He responded, “Yes. Yes.”

Djokovic reiterated, “I’m not vaccinated and I’m not planning to get vaccinated so the only good news I can have is them removing the mandated green vaccine card or whatever you call it to enter the United States or exemption. I don’t know. I don’t think the exemption is realistically possible. If that is a possibility, I don’t know what exemption would be about.” he said.

“I don’t know. I don’t have much answers there.”

Given that it appears he won’t be eligible for the US Open, he would also state, “I am on vacation. Whether or not I’m playing any tournament soon, I’ll definitely be resting for the next couple weeks because it has been quite an exhausting and demanding period for me the last few months. A lot of tennis, which I was very happy about. I got what I wanted here.”

“Then I’ll wait hopefully for some good news from USA because I would really love to go there,” Djokovic continued. “That would be probably the next big tournament, the next big swing, playing a tournament or two before US Open and US Open. If that doesn’t happen, then I have to see what the schedule will look like.”

ESPN analyst and tennis legend John McEnroe talked about Djokovic not being allowed to play at the US Open and blasted US politicians for denying tennis star Novak Djokovic’s bid to enter the United States because he is unvaccinated.

“These politicians are getting in the way too much,” McEnroe said. “They did it in Australia. Let’s let the guy come in and play in the U.S. I mean, come on. This is ridiculous.”

He continued, “But I don’t make those decisions. I hope that someone makes the right one and allows him to play. That’s my personal opinion.”

“These politicians are getting their way too much. They did in Australia. Let the guy come in and play in the U.S. I mean, come on. This is ridiculous.” pic.twitter.com/oOj8aC6Tsr

According to the New York Post, John McEnroe’s brother, Pat McEnroe also stated , “Whatever you think the government should or should not do, it’s a bummer for tennis.”

Earlier this year, Djokovic had arrived in Australia for the Australian Open but he was deported from the country by the Australian Federal Police in a move that was celebrated by progressive activists who are angered by Djokovic’s refusal to submit and get the COVID vaccine.

Back in February, Djokovic sat down with BBC News shortly after being banned from playing in the Australian Open and confirmed that he is willingly to sit out the majority of major titles this year because he refuses to get the shot and the boosters.

“I understand and support fully the freedom to choose whether you want to get vaccinated or not,” Djokovic began. “And I have not spoken about this before and have not disclosed my medical record and my vaccination status because I had a right to keep that private and discrete. But as I see there’s a lot of wrong conclusions and assumptions out there. I think it’s important to speak up and justify certain things.”

“So I was never against vaccination. I understand that globally everyone is trying to put a big effort into handling this virus and seeing hopefully an end, soon, to this virus. And vaccination is probably the biggest effort that was made. Probably half the planet was vaccinated and I fully respect that, but I’ve always represented and always supported the freedom to choose what you put into your body,” he explained.

“For me that is essential,” he declared. “It’s really the principle of understanding what is right and wrong for you and me as an elite professional athlete I’ve always carefully reviewed, assessed everything that comes in from the supplements, food, the water that I drink, or sports drinks, anything really that comes into my body as a fuel. Based on all the informations that I got, I decided not to take the vaccine as of today.”

He then elaborated, “I keep my mind open because we are all trying to find collectively, a best possible solution to end Covid. No one really wants to be in this kind of situation that we’ve been in collectively for two years. I’m part of the sport, a very global sport, that is played every single week in a different location.

Djokovic even said he was willing to forgo being the greatest player statistically to ever pick up racket. “Yes, I do,” Djokovic responded.

When asked if he would miss the French Open, the tennis star answered, “That is the price that I’m willing to pay.” He then elaborated when pressed, “Because the principles of decision-making on my body are more important than any title or anything else. I’m trying to be in tune with my body as much as I possibly can.”

Djokovic’s refusal to submit remains a sore spot for members of the media, New York Times reporter Ben Rothenberg mocked Djokovic after his decision to remain unvaccinated and miss the upcoming U.S. Open.

Rothenberg first tweeted, “Unless there is a swift change in U.S. immigration law, #Wimbledon will be Djokovic’s last Grand Slam event of the year. The U.S. requires vaccination for foreigners to enter, and Djokovic has firmly said he has ruled out getting vaccinated, entrenching himself as an anti-vax posterboy.”

Djokovic’s wife, Jelena responded to the attack and said “Excuse me. Just making sure that it is noted that YOU tagged him as antivax poster boy for whatever reason you have. He simply responded what HIS body choice is.”

What are your thoughts on Djokovic standing his ground and refusing the vaccine?

NEXT: Novak Djokovic Blasts Wimbledon After They Announce Ban On Russian And Belarussian Players: “It Is Crazy”