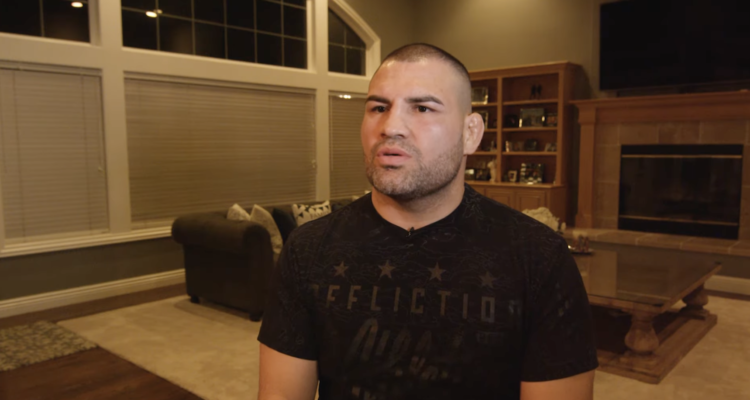 Last February, former UFC heavyweight champion Cain Velasquez was arrested for allegedly attempting to murder the man who’s accused of molesting his 4-year-old son. Now the MMA icon is fighting back again by suing the man, and his family, who own the daycare where the alleged molestation took place.

Criminal charges against Velasquez came after he pursued 43-year-old Harry Goularte through Silicon Valley, allegedly using own vehicle to ram the vehicle the man was in and firing a 40-caliber handgun multiple times into the vehicle during a high-speed chase that continued for 11 miles. Goularte’s stepfather, Paul Bender, was treated for a bullet wound to the arm and torso. Velasquez was later arrested by police during a traffic stop without incident.

Velasquez’s son told authorities from the Santa Clara County Sheriff’s Office that Goularte brought him into his family’s daycare bathroom and touched his genitals, according to a court document obtained by ESPN. He said Goularte told him not to tell anyone what happened and estimated this had occurred “100 times.” The court document also revealed he told authorities he witnessed other children going into the bathroom with Goularte.

Goularte has denied the allegations, claiming he helped a child once with pants when he noticed he didn’t have them on correctly. Goularte works at the daycare facility owned by his mother, Patricia Goularte. She told police she does not believe the allegations against her son.

Goularte was arrested for lewd and lascivious acts with a minor, and a judge released him from custody without bail, against the wishes of the district attorney’s office. He was put on house arrest and ordered to remain 100 yards away from any child under 14, and wear an electronic ankle monitor, which he was allegedly on his way to obtain when Velasquez caught up with him.

Goularte pled not guilty in court and is awaiting trial in September. Prosecutor Aaron French denounced Velasquez’s actions, saying “It’s unfortunate that he took the case into his own hands rather than waiting on the criminal justice system.” Of course, he’s referencing the same criminal justice system which released Goularte from custody without bail.

After details of the story were revealed, a movement on social media with the hashtag FreeCain gained significant momentum. His supporters wore FreeCain t-shirts at his arraignment.

MMA fighters showed their support as well. UFC’s Derek Brunson announced on Twitter that he was selling FreeCain t-shirts, with half of the proceeds going to pay for Velasquez’s legal funds.

Former UFC welterweight Ben Askren tweeted: “I don’t want to live in a country where you can’t shoot someone who sexually abused your child. #FreeCain”

Velasquez remains in jail after a judge denied his request for bail. He faces up to 20 years in prison, and his attorney Mark Geragos believes he will be vindicated.

Now Velasquez is fighting back, filing a civil lawsuit on behalf of his son, accusing Goularte and his family of negligence and sexual battery.

The childcare business and its owners “fostered and maintained an environment” where the children could be molested, sexually abused and harassed, Velasquez said in the court filing.

Stephen Defilippis, an attorney for Goularte, has yet to comment on the lawsuit.

Do you believe Velasquez’s actions were justified?