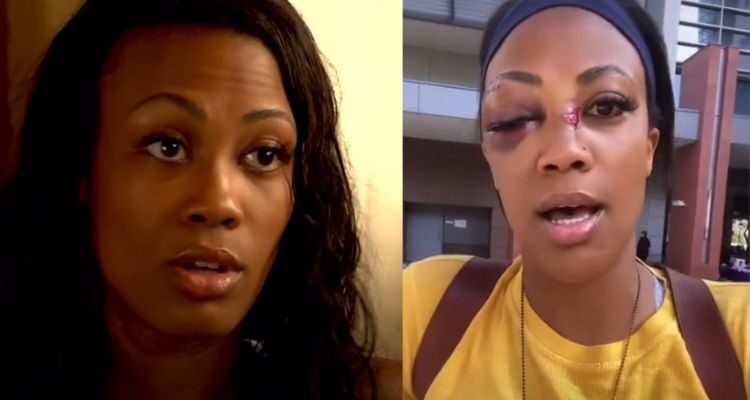 Olympic volleyball player and silver medalist Kim Glass claimed she was brutally assaulted by a homeless man in Los Angeles over the weekend.

Glass posted a video to her Instagram Stories that shows her right eye swollen and closed shut from the attack as well as a deep gash on her nose.

She began, “Alright guys, I’m doing this video because I have a lot of messages coming in and I don’t want to have to repeat myself. I appreciate all the love. And I’m sure it’s going to get out and around. And I might as well let you guys know what happened.”

She continued, “Yesterday, I was in downtown LA and I had a lunch. As I was leaving lunch I was outside and I was saying goodbye to a friend and this homeless man ran up. He had something in his hand. He was on the other side of the car in the street and he just like looked at me with some pretty hateful eyes. And as I turned to go tell my friend, ‘I think something is like wrong with him and I think he’s going to hit the car.'”

“Before I knew it a big metal bolt like pipe hit me right here, here. It just happened so fast. He literally flung it from the street so he was not even close to me at all,” Glass says.

Glass then detailed, “It kind of took me down and out and they got him and they held him down until the cops came. Ambulance came. Right now it looks like my vision will be okay. I got really great stitching from a doctor. I have just amazing friends and family around me and supporting me and that’s been the best part.”

She then detailed other wounds she suffered, “I do have multiple fractures up here and a small one here. But my friends have been, family, amazing. I just want to let you guys know what happened because I know it’s going to get out, and I’m getting a lot of messages, and I love you guys so much and just know that I am okay. And I hope you guys have a f***ing awesome weekend.”

She then offered a warning to her followers saying, “Also, guys, just be safe out there. Keep your head on a swivel, off your phones. I mean mine wasn’t, but still I wasn’t ready for it. And there’s a lot of mentally ill people on these streets right now.”

Glass concluded, “And you shouldn’t have to be fearful when you walk, but it’s true. Guys, just be safe, okay?”

According to Fox News, Glass’ attacker was identified as 51-year-old Semeon Tesfamariam and he was arrested on suspicion of felony assault with a deadly weapon. He is currently being held without bail.

YouTuber John Matrixx of Black and White Sports analyzed the story saying, “Now, in the People’s Republic of California in Los Angeles, we now have an Olympian that has now been attacked. And folks the pictures are horrific. She was attacked. What was she doing? She was minding her own business and this homeless man just attacked her.”

“LA is a dumpster fire. I would not want to live in a crime-ridden city like Los Angeles,” he added.

What do you make of this attack on Olympic silver medalist Kim Glass?

NEXT: Fight Breaks Out After Big Wreck At Hickory Motor Speedway