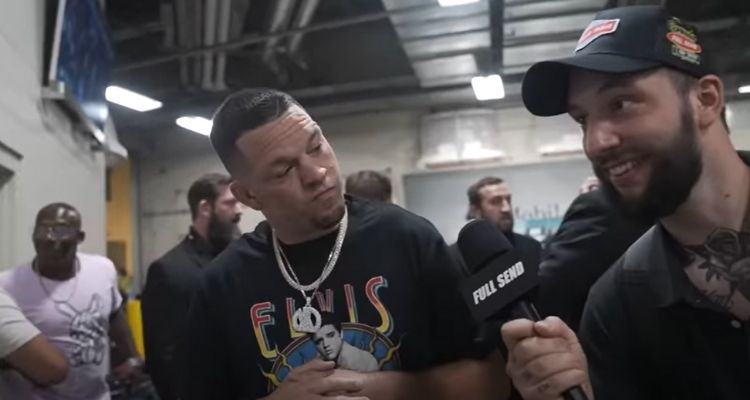 Mack approached Diaz and proceeded to try and get his comments regarding Sean “Sugar” O’Malley, whose fight against Pedro “The Young Punisher” Munhoz ended in a no contest after O’Malley accidentally poked Munhoz in the eye.

However, Diaz had no intention of talking about O’Malley. Instead he told Mack, “Nah, you better watch your tweets.” Mack responded, “Oh, I know.”

Diaz then preceded to attempt to smack the microphone out of Mack’s hand. When he failed and Mack continued to grin at him, Diaz slapped him on the top of the head knocking his hat off.

It’s unclear what tweets Diaz was taking issue with, but Mack did recently delete an Instagram post showing Diaz calling for his teammate Nick Maximov to fight the No. 3 ranked welterweight Khamzat Chimaev.

Mack seemingly was not phased by the slap combination as he did post to his Instagram, “Some of y’all forget I started out as a meme page. I knew what I was getting into when I signed up for it. Never been one to shy away from putting my opinion out there. My first weekend on the job and I got Stockton slapped. What a ride we’re on.”

Accompanying these comments he shared a meme of Will Smith slapping Chris Rock but replacing Smith’s head with Diaz’s and Rock’s with his own.

He would also share a quote attributed to Mike Tyson that reads, “Social media made y’all way too comfortable with disrespecting people and not getting punched in the face for it.”

What do you make of Diaz’s slap combination against Shawn Mack?

NEXT: Nate Diaz Says He Wants A Fight Or To Be Released From The UFC To Challenge Jake Paul