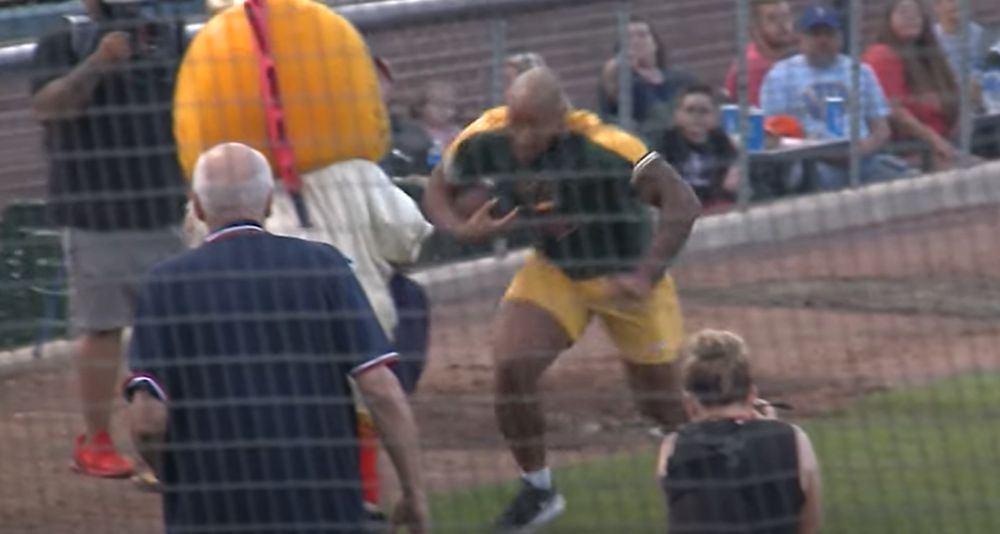 Green Bay Packers running back AJ Dillon obliterated the mascot for the Kenosha Kingfish, a minor league baseball team in the Northwoods League.

The Kenosha Kingfish’s mascot, King Elvis the First, was run over by Dillon during a celebrity softball tournament when the two participated in an Oklahoma drill.

As you can see in the video below, Dillon and Trey Meier, a 20-year-old cross country runner at the University of Wisconsin Milwaukee in the King Elvis the First suit, lined up sitting down with their backs to each other.

When the announcer counts to 3, Dillon explodes off the ground and trucks Meier in the Elvis suit sending him flying backwards and knocking his head off.

Here’s another angle of the massive hit.

Meier spoke with the Milwaukee Journal Sentinel about the incident telling them, “It’s hard to see out of that costume, it’s hard to move.”

He added, “It happened all so fast, but what I’m thinking in that moment, I’m just like, ‘I hope he kind of gently pushes me over or something like that.'”

“I still have this snapshot in my mind. I can’t see straight, so out of the corner of my eye, I just see AJ Dillon barreling at me,” he detailed.

Describing the hit, Meier said, “It was kind of a rough hit; I got the wind knocked out of me, but I got right back up after. He’s nicknamed ‘Quadzilla’ for a reason.”

He further added, “I didn’t really think much of it at first; we do promos and events like that all the time. I’ve gotten tackled on the field before as a type of entertainment thing. … But I didn’t get tackled that hard, I’ll just say that.”

Meier told WISN 12 News, “I got an autograph, I got a picture I think we’re all good, but some tickets would be nice though.” The Milwaukee Journal Sentinel also revealed that Dillon apologized to Meier and snapped a photo him with afterward. However, that didn’t stop him from having some fun on social media with the hit.

He retweeted the video shared by Bleacher Report that noted he “put this mascot in a body bag.”

RELATED: WATCH: Wild Wreck Takes Out Nearly The Entire Field In The First Leg Of The Virginia Triple Crown

He also retweeted Brendan C. Hall who wrote, “This might be the best hit AJ Dillon has laid on a defender since I watched him in an ISL game literally carry a dude on his back the last 10 yards into the end zone on a long touchdown run.”

What do you  make of Dillon’s hit on King Elvis the First?

NEXT: WATCH: Man Gets Tossed Around Like A Rag Doll By An Angry Bull During Running Of The Bulls In Spain