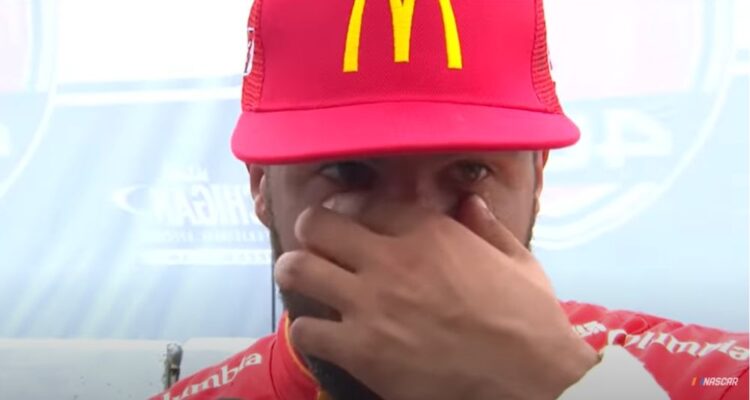 Bubba Wallace, who drives the No. 23 23XI Racing car, was completely dejected after finishing second to Kevin Harvick at Michigan International Speedway during the FireKeepers Casino 400.

During his post-race interview with NBC Sports reporter and former NASCAR Cup Series driver Parker Kligerman, Wallace was asked what he was thinking about before he exited his car.

He responded, “Replaying everything I could have done. Took the top there on the restart. Thought I could hang with the 4. And just got to racing the 5 and the 22. The 22 did a good job of getting another Ford contract; helping a Ford win.”

Kligerman then asked what Wallace would have done different to which he answered, “Get clear of the 5 sooner. He was doing his part putting it on my quarter there, keeping me tight, and just the side by side here allows the 4 to get away.”

“Could’ve taken the top, pushed the 4 and then it could — I could’ve been the 5 in that scenario,” he elaborated. “Just hate it. Hate it for our team. Sucks.”

He was then asked what his crew chief and car owner had to say to him, “Just great job all weekend. I mean it is a hell of a job for our team so there’s a lot of positives in this, but I’m a person that looks at the negatives more than positives. I need to change that, but I want to win so bad. And this was the best opportunity.”

Wallace would also tell Fox Sports reporter Bob Pockrass, “It’s an honor to be racing with these guys. You sit there before the choose and you’re like you’re going up against one of the best in Harvick, right? What do you do? Push him? Race him?

“And you have that chip on your shoulder, it’s like, man, we’ve been fast all weekend, I can outrace him,” he continued. “And I think if we were able to get away and I was able to stay with him we could have beat him. It would have been a challenge, but that’s Cup Series right? You got to fight for everything, nothing’s given to you.”

Bubba Wallace could only wonder what could have been and what he could have done differently after his second-place finish at Michigan.

“I’m going to carry this one with me for a while. I failed the team.” pic.twitter.com/7ScPmS6atc

“Humbling moment,” he added. “You got to lose one before you win one. And just proud of the momentum that we are on. This 23 team, everybody at 23XI, McDonald’s Toyota Camry was fast and all of our partners are happy. It’s looking good for us.

“But I’m going to carry this one with me for awhile,” he concluded. “I failed the team.”

Wallace also spoke to NBC Sports’ Dustin Long telling him why he was so emotional post-race, “Because I finished second. Second doesn’t get you in the playoffs. This is way worse than Daytona. Daytona we kinda just fell into that one.”

“This one we had the car, got behind a little bit on adjustments in the middle of the race. I didn’t think we were gonna get back up there. It’s so hard to pass, man,” he continued. “The aero sensitivity in these cars is  just nuts. So just had to grind and stay hungry. And get us up there.”

“Next thing you know it kinda fell our way,” he said. “And I made the wrong choice on the restart. The number one rule here, not number one, but one of the top, is to not race side by side for too long to let people get away, especially the leader.”

Wallace then stated, “Me, Logano, and Larson, we were all going for it. No one was going to lift in one. Luckily, I don’t know what happened to the 5, but me and Logano came out and he got in front of me. If we were able to clear him that moment maybe we could have made a run, but just stayed too long behind Logano.”

While he was dejected with finishing second he did note that it was a good result, “It’s a helluva result. It’s a great weekend for us. There’s a ton of positives. The only negative is that we didn’t win.

He then listed the positives, “We had speed. We had the car. The team is pumped up. Our confidence is still continuing to grow. So we get to go into Richmond with the momentum still on our side and just gotta keep after it.”

“I’m just bummed that we just didn’t win the race,” he reiterated.

#NASCAR … Here is what Bubba Wallace has to say after finishing second at Michigan. pic.twitter.com/RzjVQ6DU9E

As you can see below, following a wreck involving Christopher Bell and Ross Chastain, Wallace chose the inside lane on the restart to line up below race leader Kevin Harvick.

The top line would get a huge push from Joey Logano driving Kyle Larson into Harvick’s rear and shooting him to the lead ahead of Wallace. Wallace would then find himself in a battle with Larson when Logano got a huge run and darted to the inside of both of them.

Wallace tried to block him, but failed and Logano would drift up the track taking the position from both Larson and Wallace.

Wallace would eventually get past Logano with 17 laps to go, but by that time Harvick had built a 4.4-second lead and never looked back. There was the possibility of a late race caution with less than 5to go when Daniel Suarez blew a tire, but NASCAR officials did not wave the caution flag.

Truex currently sits 19 points behind Blaney, who is officially 2nd in the standings, but is on the playoff bubble because he is also winless.

There are three races left that includes Richmond, Watkins Glen, and Daytona before the playoffs begin.

NEXT: Denny Hamlin: It’s Possible Kyle Busch Might Not Be Racing In NASCAR In 2023