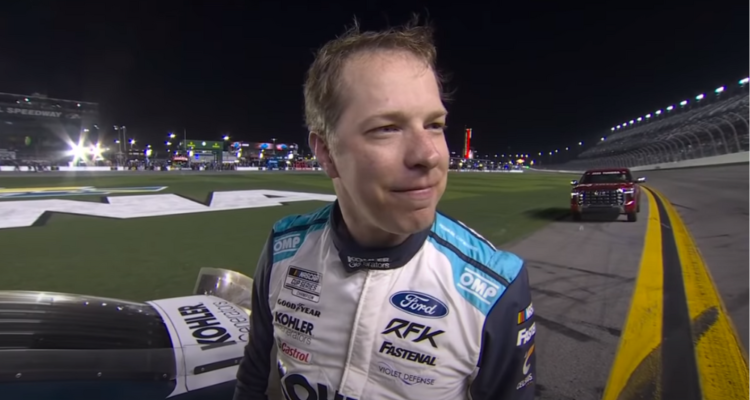 Brad Keselowski Advocates For NASCAR To Hand Out Penalties Like Candy: “The Games Have To Stop”

Brad Keselowski, the driver of the No. 6 RFK Racing Ford Mustang and part owner of RFK Racing, expressed his desire to have NASCAR dole out more penalties in order to put a stop to all the shenanigans that have been happening in the garage area for years.

Speaking with NASCAR.com ahead of the FireKeepers Casino 400 at Michigan International Speedway, Keselowski shared his desire for NASCAR to dole out more penalities.

He said, “The reality is that the garage is going through a reset with respect to kind of cutting out the games, and that’s a good thing for us as a sport.”

“I personally think the sport needs more penalties, and that NASCAR needs to be handing them out like candy right now to get control of the garage,” he asserted. “Because, you know, we’ve been playing a lot of games for a lot of years, and the games have to stop.”

“The games cost a lot of money. … And so looking at that, the easiest way for NASCAR to stop those expenses is to stop the games,” he added.

RFK Racing appealed the decision, but were ultimately unsuccessful.

Keselowski explained why they were penalized in April saying, “We had a panel that we had repaired — a tail panel — and it had a key feature that NASCAR deemed was not repaired adequately enough.”

“And it was a tough situation,” he continued. “We didn’t want to run the tail panel. We didn’t have any new tail panels to put on the car and we had a tail panel with three races on it and we did some repairs to it. We probably could have done a better job on the repair and we put NASCAR in a tough spot. It’s kind of like a trickle down effect.”

“I wish we had, quite frankly, done a better job repairing it, but we can’t go back on it. I understand NASCAR’s position. It’s kind of one of those things where everybody’s right and everybody’s wrong at the same time. And ultimately we’ll have to learn to be better for it,” he concluded.

#NASCAR … Brad Keselowski explains what was the infraction with the No. 6 car after Atlanta that led to the major penalties. pic.twitter.com/W3iJVkIDLN

RELATED: Brad Keselowski On Heavy Contact With Austin Dillon: “I’ll Talk To Him Privately, I Don’t Need To Be A Jerk Over The Media”

After losing the appeal, Keselowski said he made it his prerogative to have the team do better. He told NASCAR.com, “I know after our issues at Atlanta, we went through our entire company and said no more games.”

“Nothing goes on in these cars, period. And it’s a rapid culture shift and there’s a lot of people inside our own company that didn’t like it, but the reality is NASCAR is setting precedents that needed to be set, that we support being set, that are important to the future of our industry and its viability,” he added.

Keselowski and RFK Racing aren’t the only ones to be hit with significant penalties from NASCAR. After the race at Pocono Raceway, the apparent race winner Denny Hamlin and second place finisher Kyle Busch were disqualified during a post-race inspection.

NASCAR Senior Vice President Scott Miller explained the infraction on SiriusXM NASCAR Radio, “It was on the lower fascia. So everybody understands the fascia is the bottom part of the nose that attaches to the splitter. The nose is kind of a two-piece affair there. The lower part is called the fascia. So it was on the lower fascia. It was extra layers of vinyl that in effect deviated the part from the approved CAD file. And that’s what it was.”

🗣️ “It was extra layers of vinyl that in effect, deviated the part from the approved CAD file.”

🚨 #NASCAR SVP Scott Miller joined @DGodfatherMoody and specified what the issue was on the Joe Gibbs Racing cars of Denny Hamlin and Kyle Busch at @PoconoRaceway. pic.twitter.com/7rTyNARxVv

As for his prospects at Michigan, Keselowski said, “I would say this is about as wild card as a wild card can get this weekend. I don’t know what to tell you to expect with the new car, different tires, very little practice.”

“The one test session there was with a limited amount of cars didn’t go that smoothly so we’ll have to see. I don’t know what to expect. It could be complete and utter chaos,” he said. “It could be the best race ever. It could be somewhere in between. I don’t know.”

“I think that’s in some ways part of the fun of Next Gen is the complete uncertainty every week, what’s going to happen,” he concluded.

Keselowski currently sits in 29th place in the NASCAR Cup Series point standings with 336 points. Even without the penalty, he would only have 436, good enough for 22nd and still on the outside looking in at the playoff picture.

He has to win at either Michigan, Richmond, Watkins Glen or Daytona in order to secure a spot in the playoffs.

What do you make of Keselowski’s call for NASCAR to crack down and issue more penalties?

NEXT: Ty Dillon After Getting Run Over By Kyle Larson: “Luckily The Good Lord Was Keeping An Eye Out For Me, Keeping Me Safe”