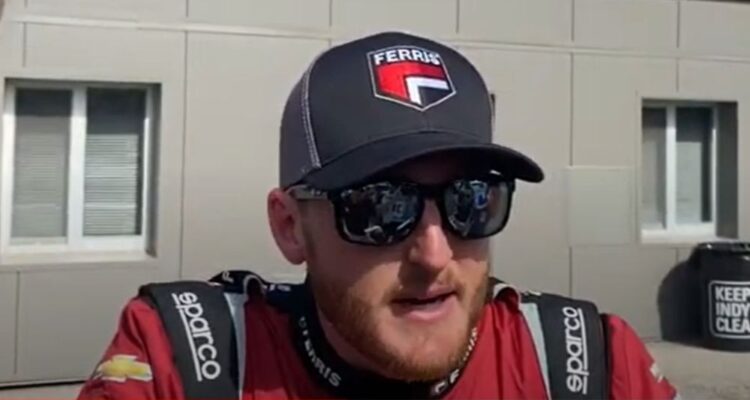 Ty Dillon After Getting Run Over By Kyle Larson: “Luckily The Good Lord Was Keeping An Eye Out For Me, Keeping Me Safe”

Ty Dillon thanked God for keeping him safe after Kyle Larson slammed into during the events of the NASCAR Cup Series race at Indianapolis Motor Speedway.

Larson ran over Dillon going around 170 mph coming into the sharp right hand turn 1. As Larson attempted to make the corner with Dillon on his outside, he launched over the curb into Dillon’s door.

The impact sent both Dillon and Larson’s cars spinning. Take a look:

RELATED: WATCH: Jeb Burton Slides Down The Front Stretch On His Roof After Violent Contact With The Wall During Xfinity Race At Pocono

After being cleared from the infield care center, Dillon addressed the media where he described just how bad of an impact it was as he thanked God for keeping him safe.

First, he described the wreck, “I saw a blue hood and an impact like I’ve never felt before in my life. Luckily, the Good Lord was keeping an eye out for me, keeping me safe. The racecar was safe.”

“That was a big one,” he continued. “I just hate it for our Ferris Camaro. We were really running strong, having a good day, cashing some points, and we’re still going to get a good finish by getting stage points. And there’s nothing you can do about it.”

“Just a string of bad luck that we’ve had this year and can’t seem to shake it. You just keep your head down in times like this and you keep working hard for your goals and your dreams and you come back better and stronger and you know things happen you just got to keep at it,” he added.

When asked about the possibility of a slight limp when he exited the vehicle following the crash, Dillon responded, “No, I just got hit by a car going about 170. So it takes a second to get your bearings back after that, but I’m all good.”

Dillon also posted to Twitter, “Yesterday was about the hardest I’ve been hit by anything. Grateful to God that I’m okay and these cars are safe enough to take a shot like that.”

He added, “We had a good run going with our Ferris Mowers Camaro. We’ve been running better, just things are happening. Onto the next one.”

While initial speculation indicated that Larson might have had a brake failure or some other kind of mechanical issue, FOX Sports’ NASCAR reporter Bob Pockrass indicated that was not the case.

Pockrass reported, “Checked with Hendrick Motorsports and they didn’t see any sign of brake failure in the Larson car following the wreck.”

When one user asked if the throttle might have been struck, Pockrass replied, “They didn’t see any mechanical failures.”

What do you make of Ty Dillon’s comments following the heavy hit from Larson?

NEXT: After The Race Is Over Ryan Blaney Spins Out Daniel Suarez In Retaliation For Being Spun Out In Final Laps At Indianapolis