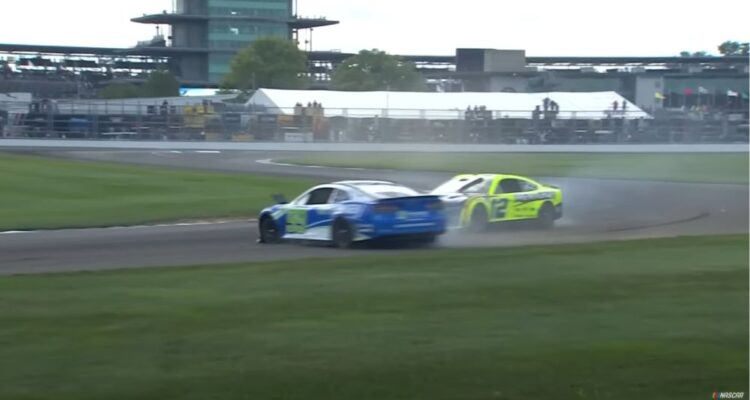 In NASCAR overtime, Blaney started right behind leader Tyler Reddick on the final restart with Daniel Suarez lined up behind him.

Suarez made a move early to try and get to the inside of Blaney to which Blaney countered with a block. Reddick would follow suit.

Blaney would drift back up and Suarez would dive underneath him making contact with his left rear tire. Suarez then used up both Blaney and A.J. Allmendinger, who restarted second, in order to make the sharp right hand turn 1. Suarez clearly overdrives the corner pushing Blaney into the bumper on the track and Allmendinger into the grass.

When Allmendinger returned to the racing surface, he clipped Blaney’s left rear spinning him across the track while Suarez got away scot-free.

Following the waving of the checkered flag, Blaney decided to retaliate against Suarez running into the left rear quarter panel of Suarez’s Camaro sending him spinning across the track.

Blaney would end up finishing 26th despite running at the front for most of the day and even leading 17 laps. Suarez finished the race 28th after he slid into the sand a couple corners after taking out Blaney.

Blaney currently sits second in points with 696. He’s behind current leader Chase Elliott who has 821. Despite being second in points, Blaney is currently on the playoff bubble since he does not have a win this season.

What do you make of Ryan Blaney retaliating against Daniel Suarez? Do you think Blaney will make the playoffs?