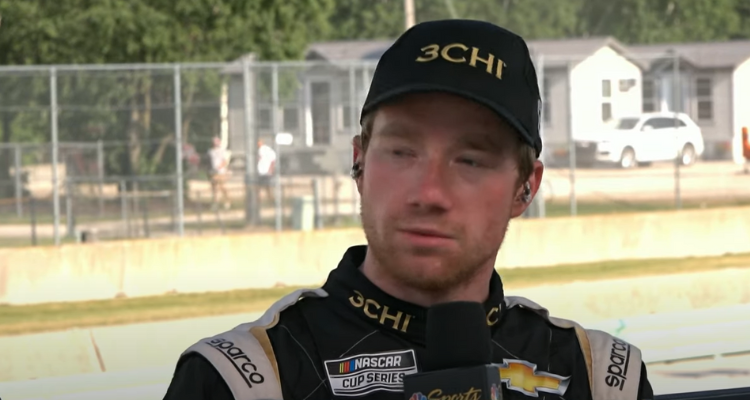 Richard Childress Racing (RCR) expressed their displeasure with Tyler Reddick announcing he was leaving the team as they prepare to chase a NASCAR Championship this year.

23XI Racing, Michael Jordan and Denny Hamlin’s racing team that is currently the home to Bubba Wallace and Kurt Busch, announced Reddick would be joining their program in 2024.

Hamlin made the announcement during a Zoom call with Toyota Racing Development’s David Wilson and the media when Reddick showed up on the call. Hamlin announced, “I’d like to announce to the media that, today, that I would like to formally announce Tyler Reddick is part of a future member of the 23XI and Toyota Racing family starting in 2024.”

First Tyler’s name appeared on the screen asking to join the media video conference. Then came the Colinsworth Slide.

They confirmed the announcement on Twitter, “Always preparing for the future. The build continues… Tyler Reddick – Locked in for 2024. SIGNED Team Toyta.”

In a press release announcing the signing, 23XI further announced, “Tyler Reddick will join the team in 2024. Reddick, a two-time NASCAR Xfinity Series champion, is currently in his third full-time season in the NASCAR Cup Series.”

They also added, “The signing of Reddick for the 2024 season highlights 23XI’s continued commitment to building a championship-caliber organization. Founded in 2021 with Bubba Wallace as the lone driver, this move follows the expansion of the team to two cars in the 2022 season.”

Team co-owner Denny Hamlin lauded Reddick’s abilities saying, “Tyler is one of the most sought-after young drivers and has been competitive in everything he’s raced.”

“His work on the track speaks for itself and he will make a fantastic addition to our lineup in 2024. The team has seen a lot of growth since our first race and signing Tyler is a great next step for us to remain competitive for years to come,” he added.

Reddick added, “I’m thrilled to have the chance to join this team and look forward to how I can contribute to the organization.”

“23XI has accomplished a lot in the less than two full seasons they’ve been in the garage, and I can’t wait to be a part of that continued success. Until then, my focus remains on my current team, winning races and being competitive,” he said.

During the Zoom call, Reddick would address the fact that he will still be racing for RCR this year and next year saying, “The biggest thing with RCR is I got my first opportunity in a Cup car with Richard and that team. And it’s been great to grow with them. And for me it was really important to finish what I started there. See it through to its end.”

He reiterated, “Like I said they gave me so many opportunities, opportunities to win, opportunities to be a two-time Xfinity champion, gave me the door to get into the Cup series. I’m extremely grateful for that and will continue to be. And expanding on that, that is why I wanted to see what I agreed to do with RCR to the end and continue to compete as hard as I can for them and against Denny and 23XI until then.”

He later added, “With the news today, we know where I am going to be in 2024 and on. I wouldn’t say this was quite a — shouldn’t have been a total shock to RCR as we were navigating what the future would look awhile ago. We said that after the option in ’23 and ’24 and on, we were not sure — awhile ago we were not sure if we were going to return. We were going to figure out what lied ahead. This shouldn’t have been a true shock to them. It’s out there and everyone has the information now and now we all will collectively figure out what do we do going from here.”

RCR responded to the announcement with a statement on Twitter reading, “We’re proud of the success Tyler Reddick has found at Richard Childress Racing. We’re focused on winning a championship in 2022 and 2023, although timing of this announcement could not be any worse.”

According to NBC Sports, Reddick responded to the RCR tweet saying, “It’s always a difficult thing when … our relationship is going to come to an end. But I feel like it gives everyone time what lies ahead, what’s the next step, where do we go from here?”

He added, “For me, in my opinion, it’s better to do it now than the playoffs. There’s no reason to kick the can down the road. We know what lies ahead. We now all know what is in front of us and what we need to do.”

Hamlin indicated that he does not know which car Reddick will drive for the organization nor who will sponsor the car.

He said, “I watched him, I raced against him, I wanted him, and I got him. And I didn’t know anything else that goes along with that. Honestly, there is no hidden secrets here. We do not know who the sponsor will be. We do not know what car it is. All we know is that we wanted him. And we made sure we planted our feet deep in the ground that Tyler had an opportunity with this race team and we made it happen.”

Denny Hamlin said he has talked with Tyler Reddick casually about potentially joining the organization and once Toyota gave him the OK to pursue Reddick, he made it happen despite not know which car Reddick will drive for the organization nor who will sponsor the car. pic.twitter.com/N9ER8fPfOk