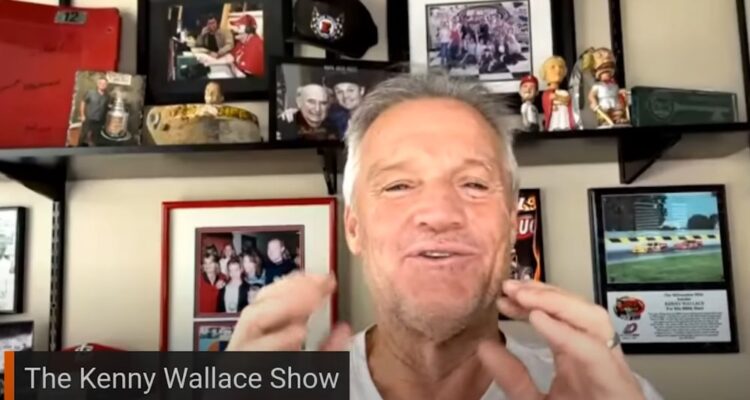 NASCAR Cup Series Managing Director Brad Moran explained the disqualifications following a post-race inspection saying, “We were doing our post-race inspections, which we would do. There was some issues discovered that affect aero of the vehicle. The part was the front fascia. And there really was no reason why there was some material that was somewhere it shouldn’t have been.”

“And that does basically come down to a DQ. It is a penalty. Both, first 11 Denny Hamlin and the 18 of Kyle Busch, have been DQ’d,” he added. “Their vehicles are being loaded in a NASCAR hauler. They’re gonna go back to the R&D Center. The final results have been changed to show that the two DQs were there.”

Moran concluded, “They have the opportunity to appeal it. It’ll be all sorted out by next week. Like Mike said I can’t get into all the details of what the issues were, but both vehicles had the same issue and unfortunately they were not acceptable to pass the inspection.”

RELATED: Denny Hamlin Reacts To Being Disqualified After Seemingly Winning At Pocono, Chase Elliott Weighs In

Chase Elliott would react to being declared the winner after the race telling the media on Monday morning, “Look, I don’t know it’s a win that I’m going to celebrate anyway. For me, I don’t really feel right celebrating someone’s else misfortune, number one.”

He later added, “Look, as I alluded to a second ago, no race car driver wants to win that way. And whether it gets overturned, or not overturned, or whatever, I’m not going to celebrate somebody’s misfortune or whatever for that situation. That doesn’t seem right to me and I crossed the line third. It’s kind of how I’m looking at it.”

Will Chase Elliott wait until any JGR appeal is heard before celebrating his victory from Sunday? Elliott: “It’s not necessarily something I’m proud of or something I’m going to boast about.” pic.twitter.com/iF2eIgTtS3

Denny Hamlin shared a picture of his daughter celebrating with the checkered flag in victory lane and tweeted, “Yeah, good luck getting that back.”

NASCAR Senior Vice President Scott Miller would go on to provide further details on the why Busch and Hamlin were disqualified telling SiriusXM NASCAR Radio, “It was on the lower fascia. So everybody understands the fascia is the bottom part of the nose that attaches to the splitter. The nose is kind of a two-piece affair there. The lower part is called the fascia. So it was on the lower fascia. It was extra layers of vinyl that in effect deviated the part from the approved CAD file. And that’s what it was.”

However, Miller would also admit that despite giving the win to Chase Elliott NASCAR did not perform the same tear down inspection on his vehicle that they performed on Hamlin and Busch’s vehicles.

🗣️ “It was extra layers of vinyl that in effect, deviated the part from the approved CAD file.”

🚨 #NASCAR SVP Scott Miller joined @DGodfatherMoody and specified what the issue was on the Joe Gibbs Racing cars of Denny Hamlin and Kyle Busch at @PoconoRaceway. pic.twitter.com/7rTyNARxVv

On his YouTube channel, Kenny Wallace called out NASCAR saying, “What NASCAR did is so stupid. It embarrasses their sport. It’s embarrassing.”

He then explained why, “You cannot go to victory lane on national TV. You cannot celebrate the win on national TV. The fans cannot turn the TV off. The fans cannot leave the grandstands. And maybe we got a winner? Do we have a winner? When people turn the TV off and when people leave the grandstands, you the fans deserve to know that was the winner.”

RELATED: WATCH: Jeb Burton Slides Down The Front Stretch On His Roof After Violent Contact With The Wall During Xfinity Race At Pocono

“So before the race, now remember I’m telling you what NASCAR will do once it becomes their idea, you will go through a rigid tech inspection before the race,” he explained. “Then after the race the car that wins the race will come off the racetrack and go through this corral pin like a cow pen. They’ll dress it up and they’ll build drama. We’ll bring in some Metallica music.”

Wallace elaborated, “And I will allow NASCAR three inspection points. They get three things to check: the weight of the car, some body things, and whatever they want. But that’s it. They get three.”

“We’re not gonna allow NASCAR to take the car back to Charlotte, North Carolina,” he asserted. “Hell, you can find anything wrong with a car if you look at it long enough. The winner’s going to come off the racetrack, gonna go in this pen, and now we’re going to switch over to this 30-minute or 15-minute post-race show. We’re going to build drama.”

“We’re gonna have a red light and a green light like we do at Eldora,” he offered. “The winner of $1 million to win Eldora. ‘Okay race fans, he has not really won the race yet. He’s going to go across the scales and if his weight is proper the green light.’ And the crowd goes [mimes cheering]. And if it’s red [emotes disappointment].”

“Now the winner’s the second place car or the third place car. Because before you turn the TV off and the people leave the grandstands we got to have a real victory lane, not a fake one,” he declared.

What do you make of Wallace’s assessments of NASCAR’s handling of the disqualifications at Pocono and his idea for post-race inspection?

NEXT: After Wrecking Ross Chastain At Pocono, Denny Hamlin Hints At More Payback