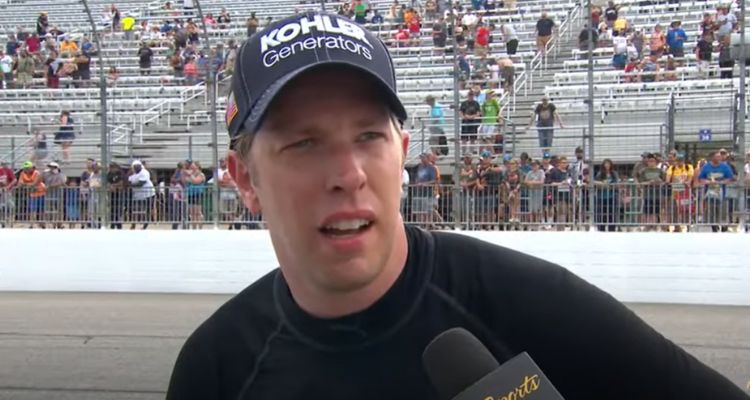 Brad Keselowski On Heavy Contact With Austin Dillon: “I’ll Talk To Him Privately, I Don’t Need To Be A Jerk Over The Media”

Brad Keselowski the driver of the #6 Mustang for RFK Racing commented on his heavy contact with Austin Dillon, the driver of the #3 Camaro for Richard Childress Racing, following the end of the Ambetter 301 at New Hampshire Motor Speedway.

During a caution in the middle of the race, Dillon drove his car up and into Keselowski hitting him on the driver side door. Keselowski quickly responded driving his Mustang hard into Dillon’s passenger side door sending his car down the track.

He then gave him a bump in the rear end for good measure that sent Dillon sideways.

Keselowski initially reacted to Dillon’s hit via his in-car radio saying, “The guy tried to wreck me down the backstretch.”

NBC Sports reporter Marty Snider indicated he spoke to Dillon’s crew chief Justin Alexander who told him, “I have no clue what happened on the racetrack.”  Snider then speculated it was just frustration with racing at New Hampshire.

After the race, Dillon told NBC Sports’ Kim Coon, “You guys saw it, right? It’s just hard racing, I guess. We’ve gone at it a couple times last two years. One time I hit really hard. Just don’t like the way certain people race me and probably not the right way to do it under caution.”

He then concluded, “But thanks for giving us an interview for the Bass Pro Shops Chevy. We weren’t very good today. And we’ll go to fight on the next race.”

Keselowski also spoke to Coon telling her, “Hot in the cars and we all let our tempers get the best of us.”

He continued, “We had a decent day here, Kim. The #6 Kohler Generators RFK Ford Mustang climbed really far that last run, I think we went from somewhere around the late teens and twenties and drove up to seven there on the last run. Proud of our team for the effort today. Certainly an up and down day and good to finish on an up mark.”

When told about Dillon’s remarks, Keselowski replied, “I’ll talk to him privately. I don’t need to be a jerk over the media.”

Keselowski would elaborate in an interview with Nathan Solomon saying, “He was mad at me about something. We very lightly got together off of 2 on a restart. Shoot, half the field was bouncing off each other. I didn’t even leave a mark on our cars. But I can understand why he was probably frustrated.”

“But then he came over and door slammed me and cut tires down,” Keselowski said. “Didn’t help any of our days. Ultimately, probably didn’t make a difference for me. We were strong enough to recover and run 7th. Didn’t do any of our teams any favors either. So moving on.”

When asked if he was pissed off by Dillon’s door slam, Keselowski replied, “Yeah, it was pretty hot in the cars and you know when it’s hot in the cars it ain’t no cooler in the helmet. I think we’re all guilty from time to time letting our anger get to us.”

When asked if he would talk about it, Brad reiterated, “We’ll figure that out outside of the media, I hope.”

At the FireKeepers Casino 400 at Michigan International Raceway last year, Keselowski spun Dillon at the end of Stage 1 that sent Dillon’s vehicle hard into the wall.

Dillon’s vehicle went airborne and nearly flipped over after making contact with the wall.

Given Dillon might have been giving Keselowski some payback for Michigan, Ross Chastain might want to take notice as Dillon was caught up in a wreck caused by Chastain last week in Atlanta.

In a post-race interview, Dillon noted, “Unfortunate our weight got our car better right there. Looked like were a casualty of Ross Chastain once again.”

He would later add, “I told myself we’re gonna race hard all day. It wasn’t one of those things that I wanted to ride in the back and be there in the end. But when you got guys like him out there wrecking half the field, you might as well actually take a different strategy sometimes.”

What do you make of Keselowski’s comments regarding Dillon? Do you think Dillon might have some payback in store for Ross Chastain?