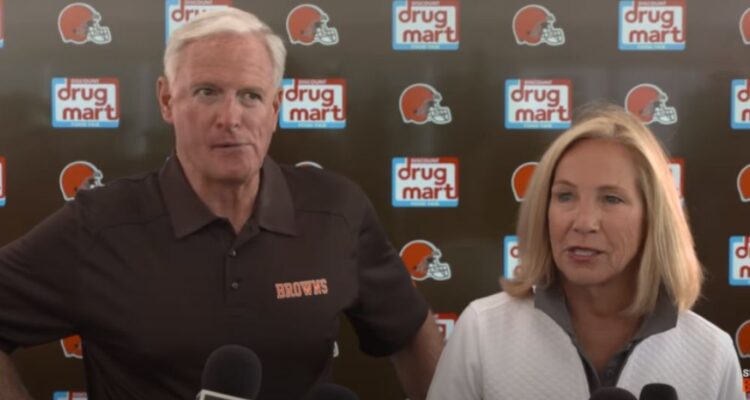 The owners of the Cleveland Browns, Dee and Jimmy Haslam, released a statement claiming that Deshaun Watson is remorseful for his actions after retired judge Sue Robinson found that Watson engaged in sexual assault and ruled that he be suspended six games.

In a 16-page decision document, Robinson made it clear that she came to the conclusion that Watson engaged in sexual assault as defined by the NFL as “unwanted sexual contact with another person.”

She wrote, “It is difficult to give weight to a complete denial when weighed against the credible testimony of the investigators who interviewed the therapists and other parties. Moreover the totality of the evidence (including the undisputed facts relating to Mr. Watson’s use of towels, his focus points, and the not uncommon experience of massage therapists to have contact with the erect penis of their male clients) lends support to my conclusion that it is more probable than not that Mr. Watson did have erections and that his erect penis contacted the therapists as claimed by them.”

She further detailed, “With respect to whether the contact was intentional, the matter of intent generally must be inferred from circumstantial evidence in the absence of an admission. In this case, Mr. Watson reached out to women whose professional qualifications were unknown and unimportant to him.”

“He insisted on using a towel, increasing the probability of exposure. He insisted on having the therapists focus on areas of his body that not uncommonly triggered erections. And he engaged in this pattern of conduct multiple times,” Judge Robinson detailed. “I find this sufficient circumstantial evidence to support the NFL’s contention not only that contact occurred, but that Mr. Watson was aware that contact probably would occur, and that Mr. Watson had a sexual purpose – not just a therapeutic purpose – in making these arrangements with these particular therapists.”

She then declared, “I find that the NFL has produced sufficient circumstantial evidence to prove the last prong of the test, that Mr. Watson knew such sexualized contact was unwanted.”

Finally, Robinson concluded, “I, therefore, find that the NFL has carried its burden to prove, by a preponderance of the evidence, that Mr. Watson engaged in sexual assault (as defined by the NFL) against the four therapists identified in the Report. Mr. Watson violated the Policy in this regard.”

It begins, “Throughout this process, Deshaun and his representatives have abided by the newly created and agreed upon process for the NFLPA and the NFL to defer to the objective Judge Sue L. Robinson to comprehensively review all information and make a fair decision.”

“We respect Judge Robinson’s decision, and at the same time, empathize and understand that there have been many individuals triggered throughout this process,” it continued.

The two then concluded, “We know Deshaun is remorseful that this situation has caused much heartache to many and he will continue the work needed to show who he is on and off the field, and we will continue to support him.”

The Haslams’ claim that Watson is remorseful contradicts Judge Robinson’s decision, who detailed in the Disciplinary Determination section, “With respect to what the appropriate discipline should be, I note that there are aggravating factors applicable to Mr. Watson, that is, his lack of expressed remorse and his tardy notice to the NFL of the first-filed lawsuit.”

Not only did Robinson note that Watson has not expressed remorse, but she also detailed that Watson “has categorically denied the allegations against him, including that he ever developed an erection during a massage.”

What do you make of the Haslams statement? Do you think Watson is remorseful for his actions?