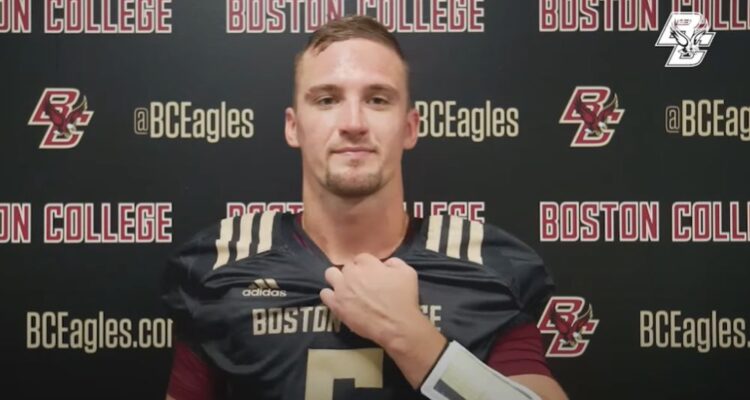 Former Notre Dame quarterback Phil Jurkovec, who played for the school in 2018 and 2019, did not mince words as he called out former coach Brian Kelly and his staff.

Jurkovec made his collegiate against Wake Forest in 2018 after an outstanding high school career at Pine-Richland where he threw for 8,202 yards and 71 touchdowns. He ran for another 2,942 yards for a total of 11,144 yards.

In his sophomore season at Notre Dame he played in six games, threw for a total of 222 yards and 2 touchdowns.

He eventually decided to transfer to Boston College and started 10 games and threw 2,558 yards setting a school record for the most passing yards by a quarterback in their first 10 games. He also became the first player in school history “to total four 300-yard passing games in his first five career starts at quarterback.”

He finished the seasons completing 61 percent of his passes and threw 18 touchdown passes.

In 2021 he started the first two games before he suffered a hand injury. He would return to start four more games. In those six games he threw for 915 yards, seven touchdowns, and had four interceptions. He also ran for 322 yards.

Speaking with Boston.com, Jukovec spoke about his time at Notre Dame saying, “I was disappointed by some stuff while I was there.”

“The football team and culture is not what people think it to be. I met a lot of great people. They do a lot of good in the world. It’s a mixed bag. I’m glad I went there, and I’m glad I left,” he added.

He went on to detail that then Notre Dame coach Brian Kelly had a meeting with his parents. It’s unclear what exactly happened during that meeting but Jurkovec made it clear that he believes Kelly lied to his parents.

Jurkovec didn’t just criticize Kelly, but he criticized his coaching staff as well, “It wasn’t as much about how they treated people — because I think they also treated people very badly, very poorly, some of the coaches there — but it was more about their lack of experience and coaching.”

Kelly is no longer the coach at Notre Dame. He left the program last year and is now the head coach at Louisiana State University (LSU). Before Notre Dame he coached at Cincinnati from 2006 to 2009, Central Michigan from 2004 to 2006, and Grand Valley State from 1991 to 2003.

What do you make of Jurkovec’s comments about Notre Dame and Brian Kelly?

NEXT: Netflix’s Manti Te’o Documentary Exposes American Media And Their Willingness To Run Narratives Counter To The Truth