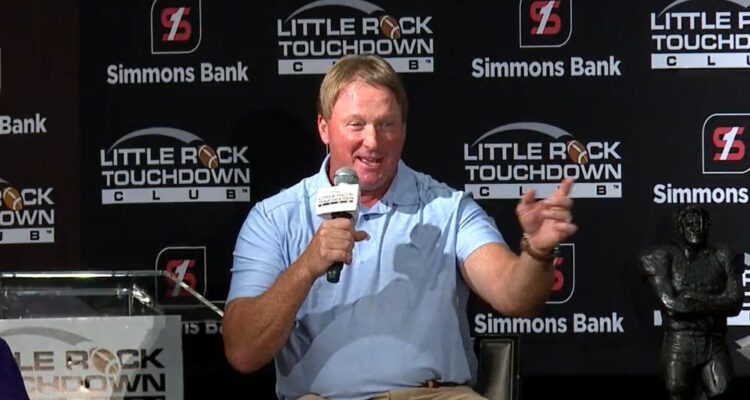 Former Tampa Bay Buccaneers and Oakland Raiders head coach Jon Gruden recently made an appearance at the Little Rock Touchdown Club where he made it clear he no longer watches ESPN.

Not only was Gruden the head coach of the Raiders and the Buc, but he was also an analyst on ESPN’s Monday Night Football from 2009 to 2017, a position he took on after coaching the Tampa Buccaneers from 2002 to 2008 and leading them to a Super Bowl in 2002.

After being asked about possibly taking on a high school football coaching position, Gruden responded, “If you’ve got a job open, put me down, baby. I’ll be interested. But I get choked up because there’s a lot of misunderstanding out there right now.”

“What you read, what you hear, what you watch on TV,” he continued. “Hell, I worked at ESPN for 9 years. I worked hard at that job. I don’t even want to watch the channel anymore because I don’t believe everything is true. And I know a lot of is trying to get people to watch.”

Gruden then asserted, “But I think we got to get back to reality and that’s why I look forward to Saturdays because you are going to get what you deserve when the whistle blows. And we’ll see if the Razorbacks can get after Cincinnati, which I hope they do.”

RELATED: Former Buffalo Bills Punter Matt Araiza’s Parents Claim Their Son Has Already Been Tried And Convicted By The Media

The Super Bowl winning coach also addressed how he’s been portrayed earlier in the interview. He responded, “I’m not going to say anything but honest things here. I’m ashamed about what has come about in these emails. And I’ll make no excuses for it. It’s shameful.”

“But I am a good person. I believe that. I go to church. I’ve been married for 31 years. I’ve got three great boys. I still love football. I’ve made some mistakes, but I don’t think anybody in here hasn’t. And I just ask for forgiveness and hopefully I get another shot,” he stated.

Jon Gruden at the Little Rock Touchdown club commenting on the emails that ended his NFL coaching career. pic.twitter.com/1ClcWtdTRn

Gruden is currently suing the NFL and its commissioner Roger Goodell. He accuses the league and Goodell of orchestrating a malicious campaign that “sought to destroy [his] career and reputation.”

His lawsuit claims the NFL obtained a number of emails sent between Gruden and Bruce Allen between 2011 and 2018 when Gruden was working for ESPN during an investigation into the Washington Football Team.

The league then used one these documents in “a Soviet-style character assassination,” the suit alleges. “Defendants first leaked a 2011 email from Gruden to the Wall Street Journal referencing DeMaurice Smith, Executive Director of the National Football League Players Association. Defendants then immediately condemned the email as ‘abhorrent’ and, with a straight face, ‘regret[ted] any harm that its publication may inflict on Mr. Smith or anyone else.’ After this leak on October 8, 2021, Defendants pressured the Raiders to fire Gruden.”

The suit then alleges that the NFL and Goodell “ratcheted up the pressure by intimating that further documents would become public if Gruden was not fired. They followed through with this threat by leaking another batch of documents to the New York Times for an October 11, 2021 article.”

The New York Times’ article was originally published on October 11th but was seemingly last updated on October 28, 2021 with a headline titled “Raiders Coach Resigns After Homophobic and Misogynistic Emails.”

The New York Times reported, “In the emails, Gruden called the league’s commissioner, Roger Goodell, a ‘f*****t’ and a ‘clueless anti football pussy’ and said that Goodell should not have pressured Jeff Fisher, then the coach of the Rams, to draft ‘queers,’ a reference to Michael Sam, a gay player chosen by the team in 2014.”

He also reportedly crudely mocked President Barack Obama and his Vice President Joe Biden during the 2012 election cycle. Other emails included making fun of Bruce Jenner, who now claims to be a woman and calls himself Caitlyn Jenner, after he received an award from ESPN in 2015 as well as criticizing the inclusion of female officials in the NFL.

Neither outlet published the emails in their coverage.

What do you make of Gruden’s most recent comments?

NEXT: Tom Brady Speaks Out on Absence: “There’s A Lot of S*** Going On”