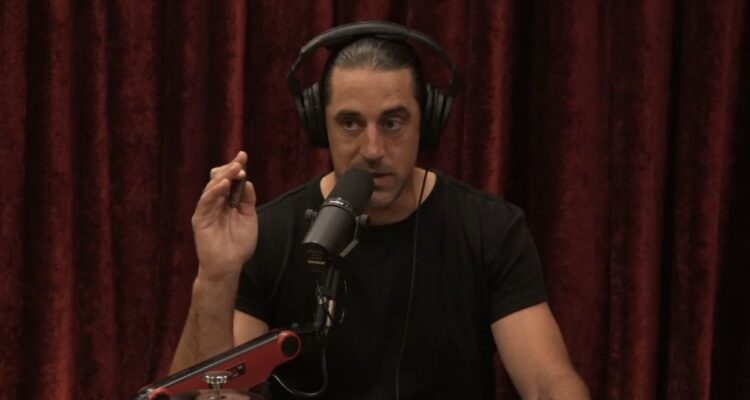 Green Bay Packers Aaron Rodgers made some bold comments during his recent appearance on The Joe Rogan Experience opposite host Joe Rogan.

After a discussion about co-morbidities surrounding people who got Covid and specifically pointing out that being obese is unhealthy, Rogan asserted, “It’s a wild time. People are really conditioned to think that they can take a medication and cure all their ills. And cure almost instantaneously something that has become a problem from lifestyle choices that you have built up over years and years and years of body abuse.”

“So if you abuse your body for so long and then you think all of a sudden that a pain pill or a this or a that pill is going to fix all that,” he continued. “And no one is telling, ‘Hey, you’ve got to lose weight. Hey, you’ve got to drink water. Hey, you should really exercise on a regular basis. Hey, what about vitamins. Do you know about Vitamin D?'”

The two then had a discussion about the percentage of the population that is Vitamin D deficient.

“They are conditioned to do exactly what they are told by their news station, by their politician; people don’t want to think for themselves anymore,” he added.

Aaron Rodgers: “People are conditioned not to think anymore” pic.twitter.com/82f1htcM8p

He then elaborated, “A person who can become autonomous, a person who can have their own job where it’s their business or its their product that they’re selling or their art that they’re selling or something where you can be self-sufficient. That is the biggest freedom that a person can have in this culture. And most people don’t have that freedom.”

“So most people are conditioned to have someone lay the rules out for them, tell them when they are supposed to be there, tell them what they get when they work for an hour,” he said. “Most people don’t have the ability to just think for themselves. It’s been taken away from them because they want to make a living,” he concluded.

Joe Rogan: “Most people don’t have the ability to just think for themselves. It’s been taken away from them because they want to make a living.” pic.twitter.com/R9FzfTcv5b

Rodgers then shifted the conversation to student loans.