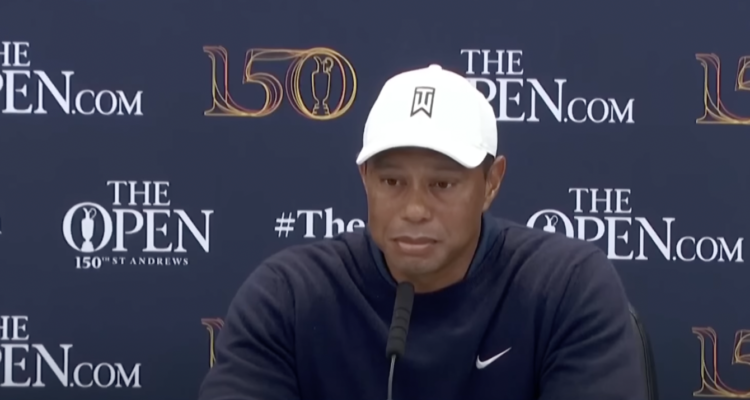 According to LIV Golf CEO Greg Norman, Tiger Woods turned down an offer between $700-800 million from new upstart LIV Golf. During an interview with FOX News’s Tucker Carlson earlier this week, Norman confirmed that LIV had made an offer to Woods.

Tiger has repeatedly spoken out against his colleagues that have left the PGA Tour for LIV Golf, most recently last month at the 15th Open Championship at St. Andrews.

Related: Charles Barkley Comes Out In Full Force Against Critics Of Saudi-Backed LIV Golf, Compares Civil Rights In The US To Saudi Arabia

“I disagree with it,” Woods said. “I think that what they’ve done is they’ve turned their back on what has allowed them to get to this position.”

Some of the biggest names in the world have joined LIV, and gotten paid big bucks for it. Major champions including Phil Mickelson, Bryson DeChambeau, Brooks Koepka, and Dustin Johnson allegedly netted over $100 million each.

However, that money did not come without consequences. The PGA tour suspended all LIV golfers indefinitely, and there is speculation on whether governing bodies of the major championships will allow LIV golfers to compete.

Many fans and commentators share this sentiment, and view LIV Golf as a cash grab. However, it’s not all about the money, at least according to Norman and DeChambeau. Both men are excited about LIV’s potential to make golf bigger and more exciting.

“I’ve always thought that golf has to start to tailor to the younger generation if we want to continue to grow the game,” DeChambeau told Carlson. “This opportunity with LIV Golf, the way it’s structured from an investment perspective… from an enjoyment perspective, an entertainment perspective… [LIV] has the ability to do things that the game of golf has never seen before.”

It remains to be seen whether LIV Golf will live up to its lofty goals, but the organization is certainly differentiating itself from the PGA Tour. LIV has introduced a team format, and plans to have more fan-player engagement at its events. However, a number of questions remain surrounding their business. They currently have no media rights deal, and are streaming events on their app and YouTube channel. On top of that, the league’s connection to the Saudi government has drawn criticism.

Regardless of what happens with LIV Golf, it will certainly be an interesting story to follow.

What do you think about Woods and DeChambeau’s comments?