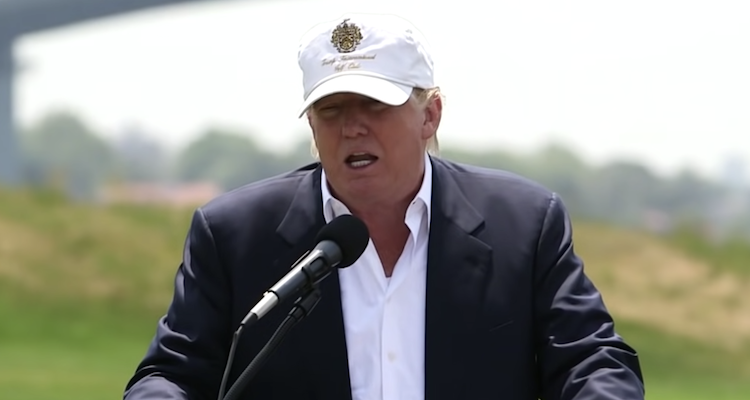 Donald Trump Urges Golf Players To Join LIV Ahead Of Potential PGA Merger: “If You Don’t Take The Money Now, You Will Get Nothing”

Former President of the United States of America, Donald Trump, recently urged golfers to join LIV ahead of a potential merger with PGA, asserting that those who don’t “take the money” soon will not get another chance later on.

“All of those golfers that remain ‘loyal’ to the very disloyal PGA, in all of its different forms, will pay a big price when the inevitable MERGER with LIV comes,” Trump said in a post shared on his social media platform, Truth Social.

Further taking swings at PGA, the former president went on, “And you get nothing but a big ‘thank you’ from PGA officials who are making Millions of Dollars a year. If you don’t take the money now, you will get nothing after the merger takes place, and only say how smart the original signees were.”

“Good luck to all, and congratulations to really talented Cam Smith on his incredible WIN!” he concluded, showing support for Australian professional golfer Cameron Smith in his recent win at the British Open.

“We find ourselves in a political situation not of our making,’’ PGA of America CEO Seth Waugh said at the time, adding, “We’re fiduciaries for our members, for the game, for our mission and for our brand. And how do we best protect that?”

He elaborated, “Our feeling was given the tragic events of Wednesday that we could no longer hold it at Bedminster. The damage could have been irreparable. The only real course of action was to leave.”

After a fairly long dispute, an agreement between The PGA of America and The Trump Organization was reached late in December.

The PGA then went on to praise Trump’s championship, declaring, “As stated in 2014 when announced, Trump Bedminster is a major championship-worthy golf course and in a portfolio along with some of the finest private and public golf courses anywhere in the world.

“While the terms of the settlement will remain confidential, representatives from both the PGA and the Trump Organization expressed satisfaction with the agreement,” concluded the joint statement.

RELATED: Florida Golfer Attempts To Kill Dog Walker, Attacks Him With Pistol And Then Proceeds To Beat Him With Clubs

Interestingly, Trump may be right on the money on this merger prediction of his. Now that he’s already encouraged fellow golfers to join the LIV, it may be time for players to start shifting their attention to the Saudi-backed golf league instead.

Sergio Garcia, Branden Grace, Dustin Johnson, Graeme McDowell, Louis Oosthuizen, Charl Schwartzel, and Lee Westwood, are among the players who officially announced their resignation to the PGA Tour membership ahead of the Saudi-backed competition.

“We have followed the Tournament Regulations from start to finish in responding to those players who have decided to turn their backs on the PGA Tour by willfully violating a regulation,” read a memo issued to current and former members of the organization by PGA Tour Commissioner Jay Monahan.

The memo stipulated that the organization’s course of action against players who are competing in LIV Golf applies to every other tour sanctioned by the PGA Tour, namely the Korn Ferry Tour, PGA TOUR Champions, PGA TOUR Canada, and PGA TOUR Lationamérica.

“These players have made their choice for their own financial-based reasons,” Monahan went on. “But they can’t demand the same PGA TOUR membership benefits, considerations, opportunities and platform as you. That expectation disrespects you, our fans and our partners.”

“Today’s announcement by the PGA Tour is vindictive and it deepens the divide between the Tour and its members,” the Saudi-backed league stated. “It’s troubling that the Tour, an organization dedicated to creating opportunities for golfers to play the game, is the entity blocking golfers from playing.”

The statement fervently declared, “This certainly is not the last word on this topic,” further adding, “The era of free agency is beginning as we are proud to have a full field of players joining us in London, and beyond.”

What do you make of Trump prediction a potential merger between PGA Tour and LIV Golf? Sound off your thoughts in the comments section down below or on social media.

NEXT: Former NBA Star Charles Barkley Says “F—K You” To Those Who Give “S—T” To LGBT Community, Days After Announcing Meeting With Saudi-Backed LIV Golf