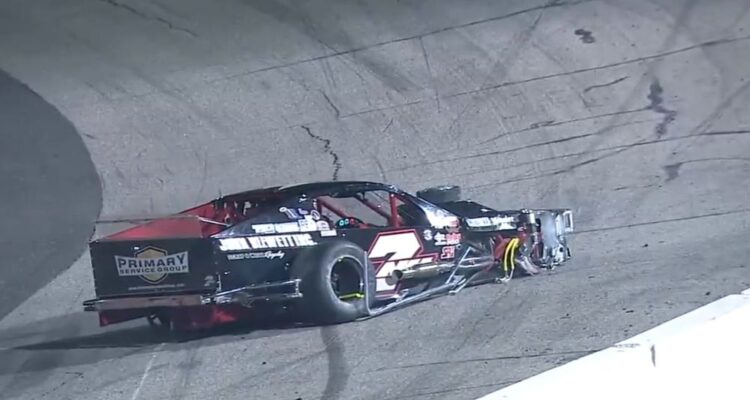 During the Whelen Modified Tour Race at Thompson Speedway all kinds of chaos took place as one car went airborne during a nasty wreck, another had its entire wheel shorn off and saw it go flying down a straightaway, and tempers got hot when Jimmy Blewett dropped a F-bomb after being wrecked.

The race went quite smoothly for the first 60 or so laps, but the caution would come out on Lap 59 with Gary McDonald spinning into the grass. Most of the drivers would take the opportunity to change tires with race leader Craig Lutz and championship contender Jon McKennedy staying out.

As the saying goes cautions breed cautions and that was definitely the case. Another single car spin involving Walter Sutcliff Jr. on lap 68 brought out the caution again.

A few short laps after they went green, a multi-car accident would occur involving Doug Coby, Andrew Krause, Dave Sapienza, Tyler Ripkema, Ronnie Williams, Ken Heagy, and Patrick Emerling. However, most of the vehicles didn’t suffer any damage and they all drove away from it.

🟡 BIG trouble for @doug_coby and a hand full of others as they pile into turn 4 at @ThompsonSpdwy! pic.twitter.com/Hh5iwed5du

During the caution, Lutz decided to take the opportunity to take his pitstop and get fresh tires. McKennedy would stay out on the track and duel with Jimmy Blewett. On the next restart, McKennedy showed that his car could still run with the cars with significantly fresher tires jumping out to the lead.

However, it would be short-lived as another caution came out for a wreck involving J.B. Fortin, Dave Sapienza, and Andrew Krause. The wreck would ruin all of their nights as they all finished in the last three spots.

On the next restart, Blewett’s fresh tires worked their magic and he was able to storm out ahead of McKennedy. McKennedy would fall into the clutches of then current points leader Ron Silk. Silk would get into McKennedy spinning him around. He then drove up and over McKennedy’s vehicle getting airborne. The wreck would also collect Kyle Bonsignore, Justin Bonsignore, and Donny Lia.

Here’s another look in slow motion.

Following the next restart, Craig Lutz who had led much of the race before he pitted, retook the lead with his much fresher tires. However, soon after he took control the caution would again fly as teammates Doug Coby and Jimmy Blewett got into each other sending Blewett’s vehicle hard into the outside wall, shearing off his entire wheel.

The wheel would bounce around on the straightaway, hit off Tyler Ripkema’s hood and then go flying into the access road.

Doug Coby and Jimmy Blewett get into each other. Blewett wrecks hard, wheel shears off and goes flying down the straightaway! pic.twitter.com/epg3tOy8D0

Here’s another camera angle and in slow motion.

Blewett’s night would be ended while Coby would continue and finish the race in third. During an in-race interview, Blewett dropped the f-bomb and promised revenge against his teammate.

He told Jessie Punch, “My teammate put me three-wide and basically put me right in the fence, you know what I mean. I really don’t understand why he was racing like that with me of all people. We got the rest of the season to race together. It’s just unfortunate for these guys, they gave me such a great car.”

“I was trying to get out of the three-wide situation. I was trying to just back out of it, and he just cleared himself off of 4 and destroyed not only my car, but his car for the rest of the season. He knows. He knows he f***ed up. But what comes around, goes around,” he concluded.

In a post race interview with Jessie Punch, Coby offered his view on the wreck.

“So I feel really bad, I mean I’m not looking to wreck Tommy [Baldwin’s] car or Jimmy, but he wanted to get by Spencer Davis really badly right there — that was the slow car — and he chose to go in the middle,” Coby detailed. I feel terrible that they got wrecked, but I got to protect my equipment. This is my team. This is my car. We got three-wide in the middle by Eric Goodale a couple of times, I backed out.”

He continued, “There was no give and take from anybody here tonight and it was like the World Series, but in August. Tore up a lot of cars, and I was kinda torn up a couple times and my guys did a great job of making the car better. We just got to survive when it comes down to that stuff.

“I’m not looking to wreck anybody, certainly with my own equipment or the 7 car. But he’s the one that went three-wide middle and he had every opportunity to back out of it in three, four, and on to the front stretch, and he chose not to. So, just how it goes,” Coby concluded.

The madness didn’t end with Blewett, championship points leader Ron Silk and Jon McKennedy, who was second in points, got into each other as they went three-wide to avoid a lap car. McKennedy got into Silk’s left rear and sent him spinning hard into the outside wall with only 17 laps to go.

Laps winding down and Ron Silk into the outside wall after contact with Jon McKennedy!

Silk would end up finishing 12th after making repairs.

What do you make of all the mayhem during the Phoenix Communications 150 at Thompson Speedway?