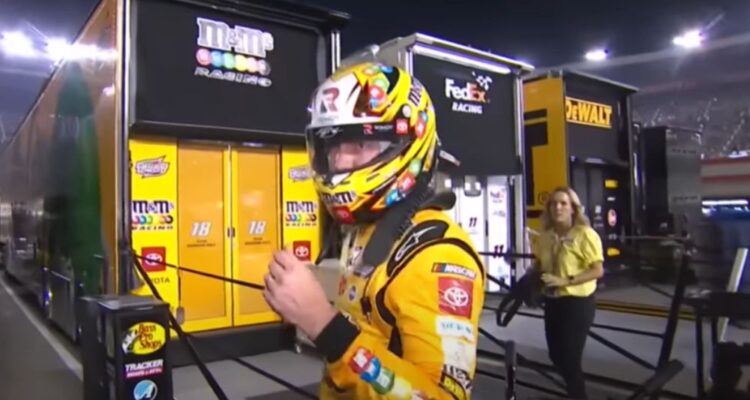 Kyle Busch via Motorsports on NBC

23XI Racing president Steve Lauletta responded to a fan positing a theory that Joe Gibbs Racing was attempting to have Kyle Busch eliminated from the NASCAR Cup Series Playoffs after he blew an engine at Bristol.

Busch parked his car in the garage after only completing 269 of the 500 laps at Bristol Motor Speedway on Saturday night. His Joe Gibbs Racing teammate Martin Truex Jr. also ended the night early only completing 198 laps after a steering issue. 23XI Racing’s Ty Gibbs also exited early after completing only 265 laps.

23XI, which is the only other team to run Toyotas aside from Joe Gibbs Racing and is owned by Joe Gibbs Racing’s driver Denny Hamlin and Michael Jordan, also had power steering issues with Bubba Wallace’s No. 45 car early in the race.

From the highest of highs to the lowest of lows.

Last week’s race winner, Bubba Wallace, has power steering issues as you can see the shiny fluid on his tire. #NASCAR pic.twitter.com/fzqFqk5tC8

Shortly after Wallace brought his car down to pit road for the power steering issue, Ty Gibbs would also bring his Toyota for a similar issue. After returning from a commercial break, NBC Sports analyst Steve Letarte would report during the race that both Wallace and Gibbs’ cars had been retired from the race.

Letarte said, “Both 23XI Toyotas, I believe, have retired from the race with power steering issues. The 45 and the 23 almost on the same lap.”

However, Gibbs’ team was still working on the vehicle in the garage area while Wallace’s No. 45 Toyota Camry TRD was seen entering the pits after the caution flag flew following a spin from Erik Jones in the No. 43 car. During that same caution is when Truex Jr. would retire his Toyota Camry TRD with the power steering issue.

On lap 240, NBC Sports’ coverage of the race would show Wallace’s team replacing the steering rack in his vehicle.

There wouldn’t be an update on Wallace until Lap 299 when Dale Earnhardt Jr. said, “Interesting to note Bubba Wallace is on the racetrack 90 laps down. He too could pass Kyle Busch as well.”

Letarte added, “That’s a good point. I’d be running down there, ‘Hey man! You sure you want to keep running? You’re into the next round. You just come on. I’ll buy you lunch.'”

Given Wallace went back on track, one fan posited the reason was to eliminate Kyle Busch from the playoffs. At the time of Junior and Letarte’s comments, Busch was five points above the cutoff.

ChampagneRacin tweeted, “23XI cars going back on track and taking points away from Kyle Busch. Joe Gibbs trying hard to get KB eliminated.”

Lauletta replied, “Joe Gibbs does not run 23XI Racing. We do and while in an Owners Championship fight we gonna take points from anyone we can with the 45 while the 23 finished behind the 18 so there’s that.”

What do you make of Lauletta’s comments?

NEXT: After A Second DNF Due To Engine Failure, Kyle Busch Says It’s A “Toyota Issue”