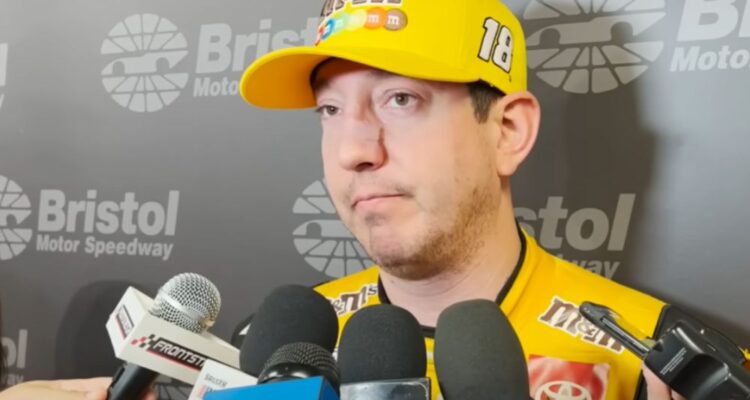 After A Second DNF Due To Engine Failure, Kyle Busch Says It’s A “Toyota Issue”

At Bristol, Busch finished 34th just ahead of Ty Gibbs and Martin Truex Jr., who were eliminated due to steering issues.

Busch spoke to the media after his early exit at Bristol saying, “Absolutely devastated. Just unfortunate circumstances obviously. Another engine failure this week. Obviously, we’re already in a hole, but puts us in a deeper one.”

“I can’t stress it enough just how much I feel for my guys and the ones that are out there pouring their souls into this effort and this opportunity for us to go race for championships. It’s not fair to them. Hate it for those guys, and Rowdy Nation, and M&Ms, and Interstate Batteries. We all want better. We all should have better and it’s just not coming to us right now,” he added.

When asked if there was any warning and about the other Toyotas having issues, Busch answered, “There was no warning. And I think some of the other issues are power steering related, mine was catastrophic.”

He was then asked about the possibility of it being mandated parts from NASCAR given Kevin Harvick’s recent comments after he was forced into a DNF following a car fire at Darlington.

“No, that’s completely different than our situation,” Busch replied. “They’re talking about the steering rack and steering parts and pieces that you’re mandated by NASCAR to run. Our issue is  a Toyota issue.”

RELATED: After Winning At Kansas Bubba Wallace Says He’s “Thankful To Shut The Hell Up For A Lot Of People”

The playoff field now stands at 12 cars with Chase Elliott back on top of the points. He’s got a 15 point lead on second place Joey Logano going into the AutoTrader EchoPark Automotive 500 at Texas Motor Speedway. Elliot has a total of 3040 points.

This second round of the playoffs includes Texas, Talladega, and the Roval at Charlotte Motor Speedway.

What do you make of Busch’s comments? Who do you have advancing into the next round? Who is your pick to win the championship?