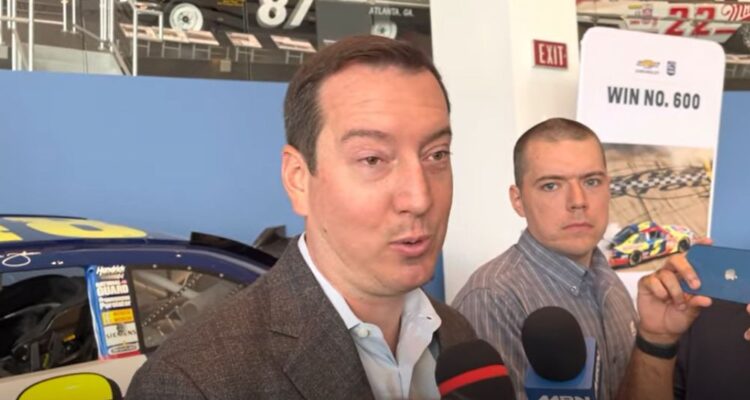 Kyle Busch, the current driver of the No. 18 Joe Gibbs Racing Toyota Camry TRD, recently announced he will be joining Richard Childress Racing (RCR) and will be taking over the No. 8 Chevrolet Camaro.

Throughout the year, Busch had remained adamant that he wanted to stay with Joe Gibbs Racing. He told NASCAR.com at the beginning of August, “I feel as though I’ve said and I’ll continue to say my first goal is to stay at Joe Gibbs Racing.”

Given Busch had made it clear he wanted to stay at Joe Gibbs Racing, he was asked how a deal between him and Gibbs didn’t come about.

RELATED: Kyle Busch Joins Richard Childress Racing: “I Had To Find A Place Where I Knew I Could Go Win Races Immediately”

Busch answered, “The only thing I can say to that is it didn’t happen. Apparently, they’ve got other irons in the fire. Maybe other sponsors for other drivers and that’s the road they’re going down.”

A member of the media then asked a follow-up, “Do you think it was money for them that they would rather get Ty [Gibbs] on the cheap than pay a champion what he’s worth?” Busch responded, “Fair assessment.”

Busch then revealed that he had been informed that the No. 18 car was not an option for him next year.

In the formal press conference Busch indicated he joined RCR because he wanted to “find a place where I knew I could go win races immediately. Collecting trophies is still the main reason why I get up everyday and go to the racetrack in order to to this every week.”

He elaborated, “Also needed a place where I felt I could hit reset and could be welcomed just as I am. This change will allow for a clean slate and that’s big for me and my family. A new team, a new teammate, new teammates. Most importantly a new boss who accepts where I have been and yet can help me get to where I want to be.”

“At the end of the day one team and one owner emerged as the clear choice. The second I sat down with him I knew that his company and his people and the culture around there had the ability to compete for championships from day one,” he said.

In the media scrum after the official announcement he detailed how Austin Dillon approached him and that RCR wanted to have him on their team was a huge factor in his decision.

Busch explained, “Just to feel wanted and to feel that they know who I am, what I am. I mean the accolades speak for itself and that I can go over there and I can help continue that build to the top and what I feel like they’re already on a good path of.”

While Busch will be moving to Richard Childress Racing next year, he’s still in the hunt for a championship this year. He’s currently below the playoff cut line heading into Bristol. He sits in 13th place out of the 16 drivers in the playoffs. Only 12 will advance after Bristol. He’s 2 points behind Austin Cindric who is currently in 12th place.

What do you make of Kyle Busch’s explanation on why a deal wasn’t worked out with Joe Gibbs Racing?