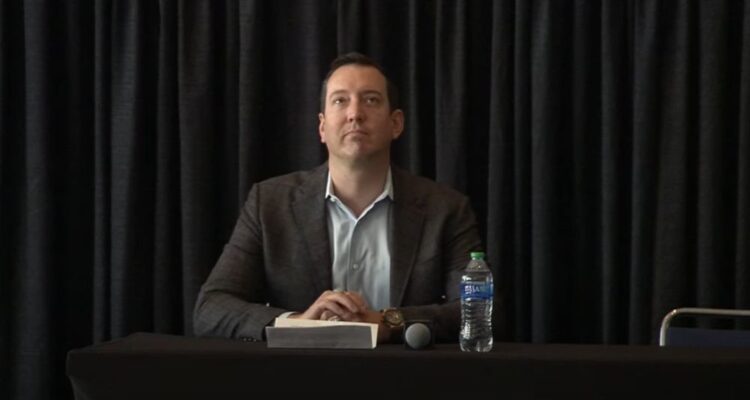 Kyle Busch Joins Richard Childress Racing: “I Had To Find A Place Where I Knew I Could Go Win Races Immediately”

Kyle Busch, the current driver of the No. 18 Joe Gibbs Racing Toyota Camry TRD, announced his decision to join Richard Childress Racing after his main sponsor Mars, Incorporated made the decision to leave NASCAR.

The loss of Mars, Incorporated, which owns M&Ms, Snickers, Skittles, and Pedigree, made Busch a free agent and it a difficult sell for Joe Gibbs Racing and Toyota to keep Busch.

He noted back in August that the loss of his sponsor meant a big change for him telling the media, “Trust me, I don’t feel like it’s fair to me or my family or anything else if we’re going to have to spend less time together moving forward because we are going to have to change our lifestyle. No questions. There’s a big change coming.”

Busch also detailed, “Thankfully, there are opportunities out there. There are Cup jobs available. But again, it will not look the same as what it has for the last 15 years.”

RELATED: Kyle Busch Gets Blunt On His Future Says “A Big Change Is Coming”

Before he made his official announcement, Busch said, “On a serious note, this is one of the biggest days of my life, of my career, and I’m excited to tell you about my future, but before we get into that there’s obviously a few statements I’d like to make first.”

He went on to thank his wife, Samantha, his children, Joe Gibbs Racing, the Mars family, Toyota Racing Development, and his fans, Rowdy Nation.

After making his thanks, Busch detailed, “The last few months have been nothing but stressful, I’ll admit. It’s been 15 years since I’ve had to make a decision quite like this, but 15 years ago it was just me. I didn’t have a family. I didn’t have a wife, and a son, and a daughter, and a race team around me that I had to worry about. It was just what I needed to do. So this process took a lot longer than I expected it to. Sure it did.”

“But this is one of the most important decisions of my life and I definitely couldn’t rush through it,” he reiterated.

Busch went on to explain some of the factors leading to his decision, “I had to find a place where I knew I could go win races immediately. Collecting trophies is still the main reason why I get up everyday and go to the racetrack in order to to this every week.”

“Also needed a place where I felt I could hit reset and could be welcomed just as I am,” he continued. “This change will allow for a clean slate and that’s big for me and my family. A new team, a new teammate, new teammates. Most importantly a new boss who accepts where I have been and yet can help me get to where I want to be.”

Busch then announced, “At the end of the day one team and one owner emerged as the clear choice. The second I sat down with him I knew that his company and his people and the culture around there had the ability to compete for championships from day one.”

“So now for the moment that you all couldn’t wait for. I’m excited to announce that I’ll be taking my talents to Welcome, North Carolina to drive the No. 8 car for Richard Childress Racing starting in 2023. I’d like to introduce you to my new boss, Richard Childress,” he declared.

In a press release, Busch added, “RCR has an impressive history in NASCAR and I’m honored that Richard is putting his trust in me to come in and continue to build on that legacy.”

He added, “Growing up in a family of passionate racers myself, I feel like the culture that the Childress family has built within their organization will be an ideal fit for me. As I begin the next chapter of my career, I’m looking forward to driving for RCR and working with everyone there to add more wins and championships to both of our resumes.”

Childress also noted, “The addition of Kyle Busch to the Richard Childress Racing lineup is significant, not only for our organization, but for the sport as a whole.”

“Kyle is a proven contender at the highest levels of the sport, and I believe that his experience and dedication to motorsports will elevate our race program across the board. I’ve always admired Kyle’s driving style and his ability to win and race for championships ever since he entered the sport,” he added. “Who wouldn’t want a proven NASCAR Cup Series Champion driving their car?”

In the press release RCR noted, “Tyler Reddick, who is currently competing for a championship in the No. 8 Chevrolet, remains under contract at RCR and will drive for RCR in 2023.

During the announcement, Childress did briefly address the future of Tyler Reddick, who signed a contract to race with 23XI in 2024 and is the current driver of the No. 8 car for Richard Childress Racing.

He would be further pressed on Reddick during the Q&A portion of the announcement when he revealed that the team would field three cars next year. Childress noted, “Yes, we will have three charters.”

When asked if Reddick would drive for the third charter team, he replied, “Yes.”

What do you make of Busch making the move to Richard Childress Racing?