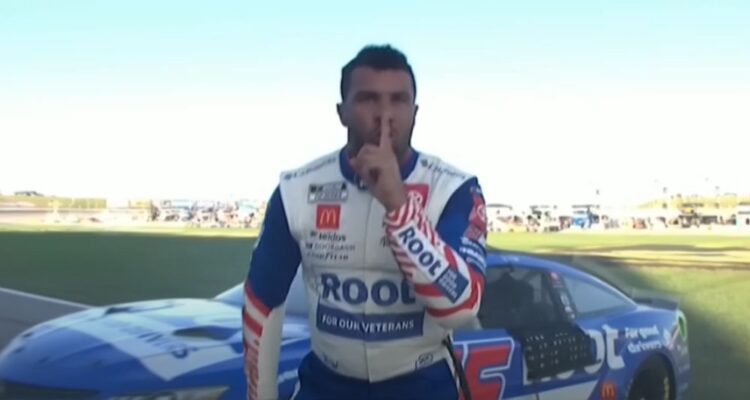 After winning the race, Wallace exited his car, climbed to the roof and celebrated. He then did a little Kyle Busch as he clapped and then put his finger to his mouth in a shushing motion.

RELATED: After Failing To Make Playoffs, Bubba Wallace To Race Kurt Busch’s No. 45 Car For Owner’s Championship In Final 10 Races

After grabbing and then returning the checkered flag he was asked what the win meant to him. He responded, “Man, just so proud of this team, so proud of the effort that they put in each and every week. Just thankful for the opportunity, right?”

He continued, “I took this jump from an idea two years ago from a text from Denny before it all even happened. He was ready to get the deal done. Appreciate him. Appreciate MJ, Curtis, Gene, everybody on that side of things. Everybody at 23XI, men and women there. They worked their tails off.”

“Just so proud. Pit crew was awesome today. We had one loose wheel. Just thankful. Thanks for the opportunity, and thankful to shut the hell up for a lot of people,” he said.

Later in his victory lane speech, he was asked if he wanted to say something to his fans. Wallace turned to the crowd and said, “True fans that are out there, thank you guys. I love you. It’s been a tough road, you guys are the best and let’s keep this train rolling.”

While Wallace has now proven he can win without a rain delay as he did in Talladega last year, it’s unlikely to silence his toughest critics. Critics who more than likely criticize Wallace because he engaged and promoted the noose hoax at Talladega Superspeedway back in 2020.

A hoax that was used to bludgeon innocent fans of NASCAR with the nasty and heinous accusation of racism.

The FBI determined that the noose was not a noose, but a door pull that had been used in the garage as early as 2019.

In their report following the investigation the organization concluded, “after a thorough review of the facts and evidence surrounding this event, we have concluded that no federal crime was committed.”

They also detailed, “The FBI learned that garage number 4, where the noose was found, was assigned to Bubba Wallace last week.  The investigation also revealed evidence, including authentic video confirmed by NASCAR, that the noose found in garage number 4 was in that garage as early as October 2019.”

“Although the noose is now known to have been in garage number 4 in 2019, nobody could have known Mr. Wallace would be assigned to garage number 4 last week,” they noted.

RELATED: Daniel Suárez Promises Vengeance Against Christopher Bell After Contact At Darlington: “I Will Get Him Back”

FBI spokesman Paul Daymon also detailed that the noose was actually a door pull. He told CNN, “It’s my understanding that the rope was fashioned into a noose knot and used as a door pull.”

NASCAR even released a photo of the door pull being used as a door pull albeit they continued to push the hoax that it was a noose with NASCAR President Steve Phelps stating, ““As you can see from the photo, the noose was real, as was our concern for Bubba. With similar emotion, others across our industry and our media stood up to defend the NASCAR family. Our NASCAR family. Because they are part of the NASCAR family, too. We are proud to see so many stand up for what’s right.”

Despite the noose being revealed as a door pull and the FBI determining there was no crime committed, Wallace doubled down telling CNN’s Don Lemon, “It was a noose. Whether tied in 2019 or whatever, it was a noose. So, it wasn’t directed at me but somebody tied a noose. That’s what I’m saying.”

He also took to Twitter where he described the noose being revealed to be nothing more as a door pull as “despicable act of racism and hatred.”

He wrote, “Today’s despicable act of racism and hatred leaves me incredibly saddened and serves as a painful reminder of how much further we have to go as a society and how persistent we must be in the fight against racism.”

“Over the last several weeks, I have been overwhelmed by the support from people across the NASCAR industry including other drivers and team members in the garage. Together, our sport has made a commitment to driving real change and championing a community that is accepting and welcoming of everyone. Nothing is more important and we will not be deterred by the reprehensible actions of those who seek to spread hate,” he said.

He concluded, “As my mother told me today, ‘They are just trying to scare you.’ This will not break me, I will not give in nor will I back down. I will continue to proudly stand for what I believe in.”

Given Wallace is unapologetic about promoting this hoax, it’s unlikely his toughest critics will relent on their criticism despite winning this past weekend at Kansas.

What do you make of Wallace’s win and his comments after the race?

NEXT: Bubba Wallace Inks Multiyear Contract Extension With 23XI Racing Less Than A Week After Saying “I Failed Everybody”