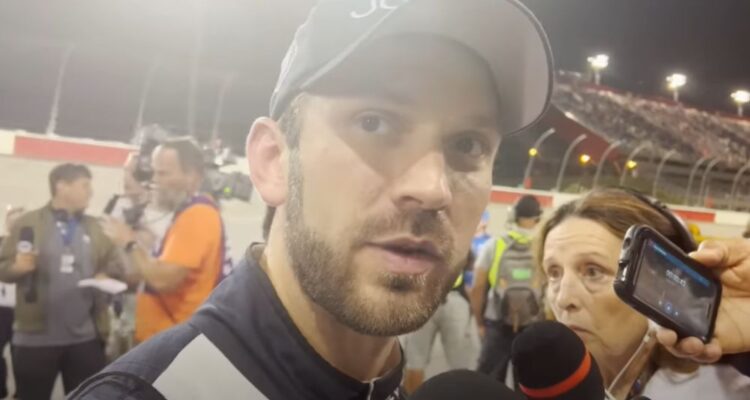 Daniel Suárez Promises Vengeance Against Christopher Bell After Contact At Darlington: “I Will Get Him Back”

Daniel Suárez, the driver of the No. 99 Trackhouse Chevrolet Camaro, promised revenge against Christopher Bell after Bell got into him at the end of Stage 2 at the Southern 500 at Darlington Raceway.

As Stage 2 was coming to a close, Suárez was in the preferred outside lane and running in fourth. Bell drove it in deep into the turn and used Suárez as a buffer. Bell drove up the track slamming Suárez hard into the outside wall.

The contact with the wall would allow both Joey Logano and William Byron to get underneath Bell after he disposed of Suarez. Not only would Suárez get passed by Logano and Byron, but Alex Bowman would also drive past him. Eric Jones, the eventual winner of the race, also tried to get around Suárez, but he was able to hold him off and eventually finished the stage in 8th.

After the race, Suárez spoke to the media and promised that he would be giving Christopher Bell a little taste of his own medicine in the future.

When asked about the contact between him and Joey Logano and Christopher Bell, Suárez answered, “Well, the 22 I don’t remember. I don’t think we had contact with him. But for sure with the 20. He owes me. I will decide when to get that one back.”

“It shouldn’t happen like that,” he stated. “He hit me pretty good. I feel lucky that actually I was able to continue. I hit the wall very, very hard and I lost like five positions on that stage. I will get him back eventually.”

“That just tells you, you know, how smart are some drivers. It’s only round one, first race, and they are already racing like that. We’re not even in stage three yet. But it is what it is. I can only control the 99 car.” he opined.

When asked a follow-up on what type of vengeance he will enact on Christopher Bell, Suárez elaborated, “Whenever I need, I’m going to get him back. I’m not saying it’s going to be in Kansas or Bristol. But he definitely owe me one. And I’m going to save that for later.”

The first round of the playoffs continues at Kansas and then moves to Bristol where four of the 16 cars will be eliminated. Currently, Austin Cindric, Austin Dillon, Chase Briscoe, and Kevin Harvick are the bottom four cars, but anything can happen in the ensuing weeks.

What do you make of Suárez’s promise of vengeance?

NEXT: Kevin Harvick Blasts NASCAR For “Crappy A** Parts” After His Car Erupts In Flames, Says “They Don’t Care”