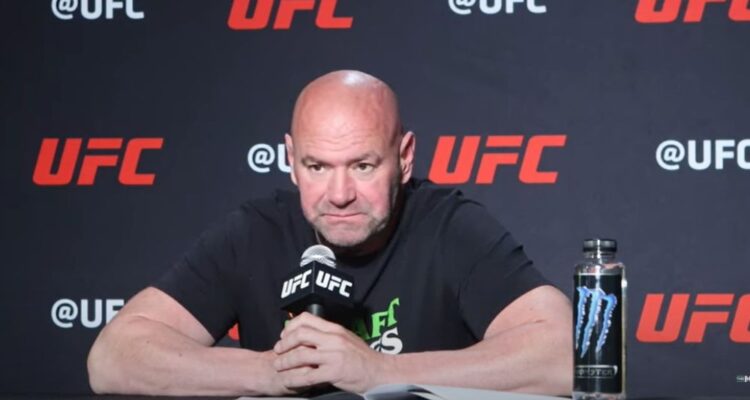 Costa replied, “Do you want to fight me?”

Costa shared his version of events to his own YouTube channel telling his viewers that Chimaev was “scared.” “The guy stood there and froze,” Costa added. “He froze, man.”

“I actually was not surprised,” Costa continued. “As I said before cupcake Chechen. Gourmet Chechen. He’s a bully with small guys and shine guys, not big guys like me.”

White was asked about the altercation and if he intervened in any fashion. He responded, “No. Guys, you know I don’t do this. We’re in the fight business. This stuff happens.”

“And it’s up to us to make sure that they don’t fight at the PI,” he continued. “That’s our job.”

White then stated, “Fighters will be fighters. And, you know, those things are going to happen and we’ll deal with it.”

Chimaev is currently the #3 contender in the Welterweight division behind Kamaru Usman and Colby Covington. Leon Edwards is the current champion after knocking out Usman at UFC 278.

Chimaev takes on Nate Diaz at UFC 279 at T-Mobile Arena in Las Vegas. Chimaev is heavily favored with oddsmakers placing the odds at -1050. Diaz is at +700. The card also features a Welterweight bout between Li Jingliang and Tony Ferguson as well as a Catchweight bout between Kevin Holland and Daniel Rodriguez.

The other two fights on the main card include a women’s Bantamweight fight Irena Aldana and Macy Chiasson and a Light Heavyweight fight between Johnny Walker and Ion Cutelaba.

What do you make of White’s comments about the dust up? Would you want to see a fight between Chimaev and Costa?

NEXT: Leon Edwards’ Coach Responds To Jorge Masvidal’s Claim He Will Be Champion: “You Little Rat Judas, Your Time Will Come”