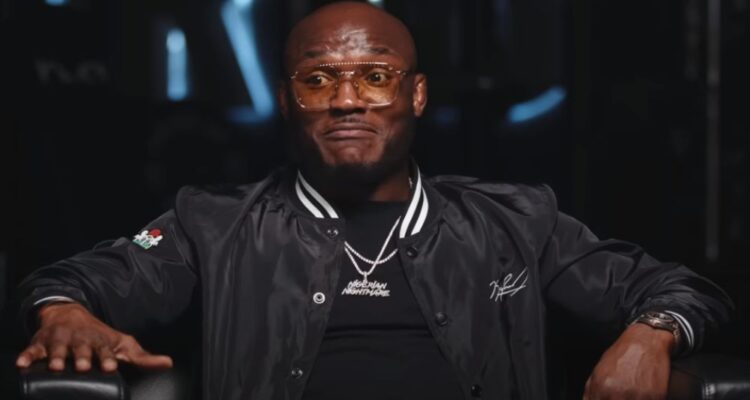 After coming out on the wrong end of one of the craziest upsets in UFC history, former UFC welterweight champ Kamaru Usman is taking his loss, well, like a champ.

Speaking to TMZ Sports after his KO loss to Leon Edwards, Usman had high spirits and was extremely complimentary of his opponent.

It absolutely was. After dropping the first round, Usman basically dominated until the last minute of the 5th round. “The Nigerian Nightmare” was cruising to his 16th straight win, about to tie Anderson Silva’s record. Edwards looked listless, and even the UFC commentators were counting him out.

Most people would be devastated just days after a loss like that, but Usman seemed fine. Part of the reason Usman feels this way is likely due to the way the fight was going prior to the head kick.

“That’s the beautiful thing about this sport,” Usman continued. “That [kick] happens, but we forget what was actually taking place in that fight.”

In fact, he says his family and friends are more upset than him.

“It’s like everyone’s more sad about it than I am,” he added. “Everyone’s more emotional about than I am but that’s because — for me, that’s a good thing ’cause it lets me know that people care, people are invested.”

Usman made it clear who and what he wants next. He wants the trilogy fight with Edwards, and he wants it in England, Edwards’ home country.

UFC President Dana White seems on board with Usman’s plan. But, he made some interesting comments on Usman’s mindset following the loss. Speaking to the media after the most recent episode of Dana White’s Contender Series, White said that Usman felt a degree of relief.

Perhaps the relief is another reason Usman was in unusually high spirits. However, that’s not to say that he’s not eager to get his title back. He made that abundantly clear.

“Hats off to him [Edwards]. We’ll see each other soon.”

What do you think of a potential third fight between Usman and Edwards? Can Usman get his title back?

NEXT: UFC Welterweight Champion Kamaru Usman Blasts Our Narcissistic Culture, Says Most Motivating Thing For Him Is Being An Example To His Daughter