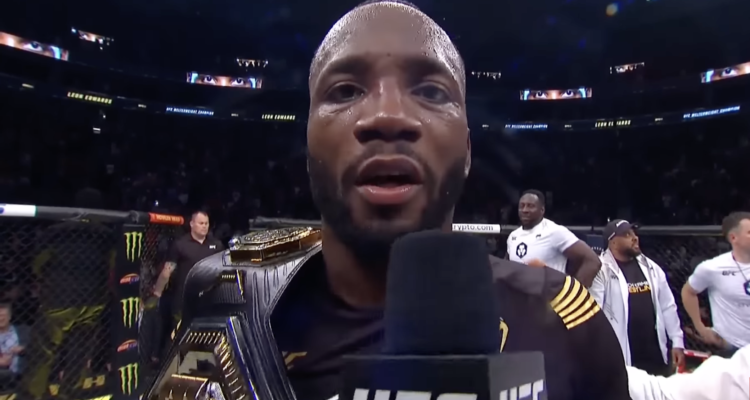 Leon Edwards’ Coach Responds To Jorge Masvidal’s Claim He Will Be Champion: “You Little Rat Judas, Your Time Will Come”

UFC Welterweight Champion Leon Edwards’ coach, Dave Lovell, isn’t afraid to ruffle some feathers by telling welterweight contender Jorge Masvidal he’s going to have to wait his turn if he intends to fight Edwards for a shot at the title.

Fans have eagerly been watching as the two fighters have been on a fiery path the last three years, but Lovell believes Masvidal, who has been on a three fight losing streak, isn’t worth Edwards’ time.

Edwards knocked out odds-favorite Kamaru Usman, the holder of the welterweight title at the time, with an excellent feint followed by a devastating kick to the head at UFC 278. Almost immediately after Edwards’ stunning victory, Masvidal began hyping himself up on Twitter, posting “I will be the ww champ of the ufc soon.”

Masvidal also blasted Daniel Cormier after he suggested that Edwards not fight him for the title on the DC & RC show. Cormier said, “Bro, don’t fight him. Because for two years, when he was the man, he could not say your name. Now all of a sudden he’s like ‘if you become the champ,’ he wants to put and end to this thing? He should not fight Jorge Masvidal. He literally should just big league him and not even say his name. Because why would you do that when a guy snuck you backstage but then never fought you? Now all of a sudden, you’re the man and he wants to fight you.”

“And I like Jorge Masvidal a lot,” Cormier added. “He’s a really good dude, but it’s like, come on, Jorge. We’ve got to do better than that.”

Masvidal responded on Twitter writing, “Guess you’re still butt hurt since I didn’t do the interview you requested on your weak YouTube channel during my fight week. I know you needed my name to produce some sort of views since Ariel went solo and you became a has been.”

He added, “Just make sure when Dana calls and you tells you to promote the biggest fight the current champ can make in the division which is me, wear your best suit from DXL and make sure you do as your told like a good boy. Maybe you’ll get a treat from your master.”

“But now he’s climbed the top,” Lovell continued. “Now he can be the one at the top of the mountain knocking back people. Well, you can stand at the back of the line, Mr. Masvidal, for starters.”

Lovell continued to go after Masvidal, “Mr. Masvidal, you little rat Judas, your time will come also, but we’re picking on our terms. The same way you told Leon to wait in the back of the line, well you wait now, mate, because Leon is at the top of the hill.”

Masvidal responded to Lovell’s comments writing on Twitter, “I don’t disrespect my elders so God bless you sir and hope you give your boy the best advice possible. The funny part is if your boy loses to Usman you and him will be begging again. Good luck I’m rooting for you guys.”

Whether Edwards is on the same page as his coach though is in question. In June, Edwards had mentioned during an interview on the MMA Hour that he’d be willing to give Masvidal a shot at the title should he beat Usman.

“I’d love to have the Masvidal fight. I think that would be a great pay-per-view and a great backstory to it, you know? But I think what’s gonna happen is I’ll beat him in August and probably we’re gonna rematch in like the end of the year like Decemberish. That’s what’s gonna happen,” Edwards said.

If a potential fight is in the works one day, it might have to wait since Masvidal’s pre-trial hearing started this week stemming from an alleged assault of Masvidal’s last opponent, Colby Covington, outside of a Miami Beach restaurant last spring.

Do you think Edwards and Masvidal will step into the octagon to face each other for the title anytime soon?

NEXT: UFC Fighter Jorge Masvidal Declares FBI Raid On Donald Trump Is “The Tactics Of Cuba And Venezuela”