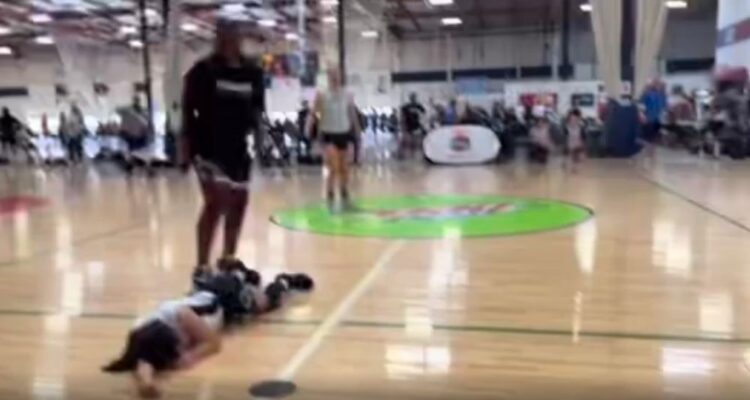 The mother of a girls basketball player who told her daughter to go over to an opponent during a youth basketball game last year and viciously attack her has been fined $9k.

The woman at the center of all of this, Tira Hunt, has not only been ordered by the court to pay $9,000 to the teenage victim, she has also been ordered to enter an anger management program.

This situation began in November last year when Hunt was caught on video telling her daughter to commit the violent act following an accidental on-court collision. The victim’s mother, Alice Ham, immediately contacted the police, and in December Hunt was charged with two misdemeanors including “contributing to the delinquency of a minor” and “battery.”

The video clearly shows the two girls bumping into each other while Hunt’s daughter attempted to make a shot. Thinking that the bump was intentional, Hunt told her daughter to commit the act of violence, from there walking over to the victim and punching her in the throat.

“This mom told her daughter to ‘go and hit her’ and my kid gets an unprovoked sucker punch,” Ham stated in her post.

Hunt avoided facing a year behind bars when an Orange County Judge approved the fine on top of the program to sort out her behavior. Part of the long list of other requirements she has to follow through on include writing a letter of apology to the teenage victim, the victim’s parents, and the two basketball teams whose game she ruined.

She has also very clearly been ordered to avoid all forms of contact with the victim.

Former NBA player Corey Benjamin, who happens to be the father of Hunt’s daughter, issued his own apology on behalf of the family following the violent attack.

“To the young lady who was punched by my daughter during a youth basketball game, I sincerely apologize to you and I am praying for your complete healing both physically and emotionally,” said Benjamin.

Brett Greenfield, the attorney who represented Hunt, said after the case closed that the results mark “a resounding victory for both Ms. Hunt and her daughter who from the inception of this incident took accountability for their actions and did everything in their power to rectify this situation.

“Unfortunately, this incident opened the social media door for many individuals to make direct statements to Ms. Hunt and her minor daughters,” Greenfield continued. “These statements were infected with racism, bigotry, threats, humiliation, bullying and more.”

Greenfield also mentioned that online harassment forced Hunt and her children to hide in a hotel due to the threats. “Defendant was forced to pull her juvenile daughter out of school for months,” he said, “and only now is her life starting to become normal again.”

What do you make of this ruling?

NEXT: Phoenix Mercury Player Diana Taurasi Kicks Opponent In Groin During Game, Gets No Whistle For Obvious Foul