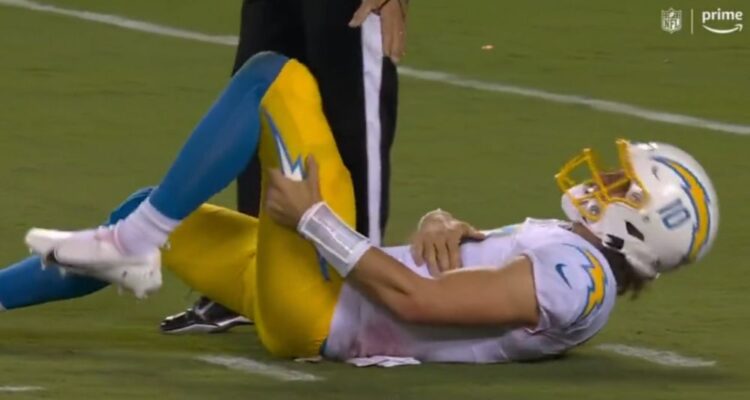 Los Angeles Chargers coach Brandon Staley gave an update on QB Justin Herbert who was injured during the team’s loss against the Kansas City Chiefs on Thursday night.

Herbert was knocked out of the game for a single play after taking a hard hit from Chiefs’ defensive end Mike Danna with about five minutes left in the game. After taking the hit Herbert can be seen grabbing his rib cage. He was then treated extensively on the field by the Chargers medical staff.

Chase Daniel would enter the game for a single play, handing the ball off to running back Sony Michel. Following that play Herbert re-entered the game.

However, he could still be seen in pain throughout the rest of the game, but played through it. After failing to run for an easy first down on third down choosing instead to throw the ball away, he came back on fourth down and threw a 35-yard laser to DeAndre Carter.

That touchdown would break the then tie, putting the Chiefs up 24-17. They would add on another field goal taking their lead to 27-17. Herbert would lead the Chargers on their final scoring drive throwing a 7 yard TD pass to Joshua Palmer. The game would end with the Chiefs winning 27-24.

RELATED: Stephen A. Smith Suggests The Dallas Cowboys Pick Up Colin Kaepernick Despite His Preseason Workout With The Raiders Described As A “Disaster”

Following the game, Staley addressed the press informing the media that Herbert is “okay.”

He said, “He’s okay. It was a tough game and you’re not going to see a quarterback in any level of football play tougher and do more for their team and will their team to give them a chance than him. There’s nobody that can do what he can do. Nobody. He showed a lot of guts. He showed us what he shows every day that we’re never out of the fight, and he brought us back and gave us a chance.”

Answering another question from the media, Staley said, “It was just a tough NFL game and he took some big hits and none of those big hits had any impact on him bringing his team back like he always does.”

What do you make of Staley’s update on Herbert?