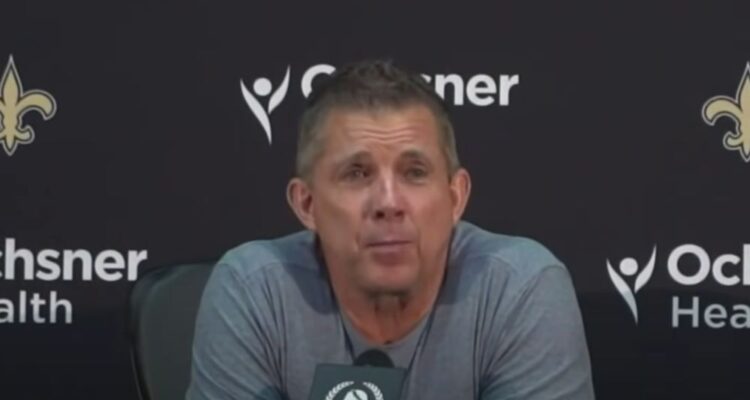 Payton appeared on The NFL Rhodes Show with Lindsay Rhodes where he took Rodgers to task not only for his play on the field, but the way he handled his post-game statements to the media.

The Packers fell to the Vikings 23-7 with Rodgers completing 22 passes on 34 attempts for 195 yards. He also threw one interception and was sacked four times for 33 yards.

After the game Rodgers admitted he and the team didn’t play well when he was asked about his offensive tackles missing the game, “That’s an excuse so we don’t like to say that. These guys are NFL players. There’s expectation whoever’s in there that they’re going to play well.”

“We had a lot of chances today. I’m not taking anything away from their defense, but we hurt ourselves many times, myself included. I had a lot of opportunities to score more than 7,” he said.

When comparing the team’s opening game to last year, Rodger was more optimistic, “I feel like we had a much better performance. We scored four more points than we did that day. It’s a lot to build on when you compare the two.”

“Look, it’s tough to win in this league and definitely tough to win when you get in your own way too many times. I felt like we did some good things. Maybe got to get some more touches for Jonesy and Dylan. Made a lot of mistakes in the perimeter, missed some throws, so there’s a lot to clean up all the way around,” he elaborated.

Rodgers was then asked how the game might have been different if a dropped pass on the first play was caught and resulted in a 75-yard touchdown score.

Rodgers answered, “I don’t like to play those what-if games. But the games usually do come down to a few plays here and there. If C-dub catches that one 75-yard touchdown, if I pull the one on the goal line, I walk in for a touchdown, there’s 14 points. Let’s see 23-7, yes, so we would have been right in it.”

He was then asked if there were any other big plays that might have made a difference, he responded, “Well, there’s some execution issues for sure that didn’t allow us — you know the pick was a real dumb decision by me, but the play was a good play and we totally blocked it wrong.”

“We’re supposed to block a certain way. Z came basically untouched and the back had to block him, I had to roll to the left,” he explained. “I guess that was a fumble. But just stuff like that where we have a down the field shot. If we just block it the way we know we’re supposed to block it there’s going to be an opportunity to take a shot down the field. We don’t. I go to move. I should throw it away. I don’t. I fumble. Take the ball back get three points. That’s one example. There were probably three or four others.”

When asked about his receiving corps, Rodgers said he didn’t have a comment. However, when further pressed he said, “I mean we knew there’s going to be growing pains. This is real football. It counts. It’s different. There’s nerves. I thought Christian ran a great route to start the game. We talked about it during the week. ‘Do you really want to start off with a bomb shot?’ I said, ‘Yeah, what the hell, why not? This kid can really fly, let’s give him a chance.'”

Rodgers continued, “I was teasing Patrick after the game that we got him. He said, ‘Yeah, I wasn’t quite warmed up yet.’ But we gotta make those plays. But that’s gonna happen. It’s the mental mistakes that we really got to clean up. And there was too many across the board.”

He then stated, “Here’s the thing, I didn’t think he played well. I didn’t think Aaron played well. And there were a number of situations — but ultimately when you watch that game if you looked at the offensive and defensive lines and grant it Green Bay had some injuries in the offensive lines, but the fronts, the fronts of both teams, I think that battle was won on both sides of the ball by Minnesota.”

“And then the rest was a byproduct of what we saw in the game,” he continued. “So one quarterback was under duress, the other had more time. And then one running game was a little more balanced, and the other was just eh. And all the other things then become more problematic when you are losing that battle upfront.”

Payton then took issue with Rodgers’ post-game answers, “Then after the game we go to the interview in the locker room, and the very first question posed to Aaron was about bouncing back and he referenced the first play of the game, the dropped pass to the rookie, and I thought ‘Come on.’ I felt the same way.”

When asked if Rodgers’ tough love strategy towards his receivers can work, Payton responded, “I want to see some tough love with Aaron. I want to see, ‘Hey, let’s go.’ They’re third and one late in the game getting back into it. They just need a first down in the red zone to keep the drive going. They throw the ball incomplete. Throw it incomplete. And the game’s over.”

“And I’m sitting there watching in the green room thinking that didn’t just happen,” he continued. “Go get the first down. Let’s go.”

Payton then asserted, “That’s a team that would concern me,” referring to the Packers.

He would also counter Rodgers’ assessment when comparing the Packers to last year saying, “Look, they had that type of lost last year to us in week 1. But they were a better team last year in week 1 than they were in week 1 this year.”

What do you make of Payton’s criticism of Rodgers’ play and his comments post-game?

NEXT: Aaron Rodgers Says “Just About Every Conspiracy Theory Came True” Regarding Covid-19