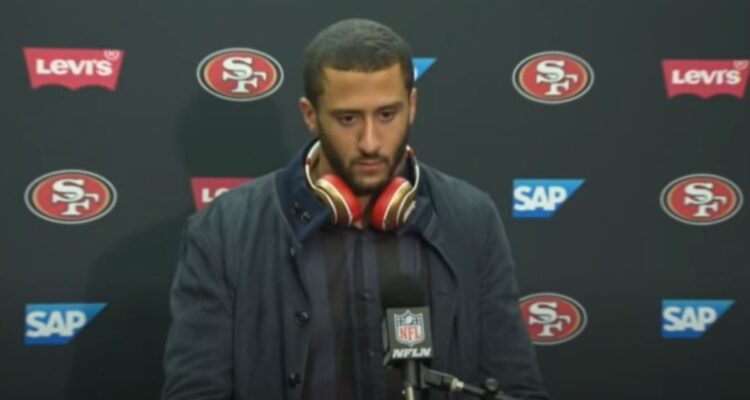 Stephen A. Smith Suggests The Dallas Cowboys Pick Up Colin Kaepernick Despite His Preseason Workout With The Raiders Described As A “Disaster”

Stephen A. Smith is upset at the Dallas Cowboys for not showing interest in bringing in Colin Kaepernick to replace the injured Dak Prescott.

The Cowboys were forced to turn to a former undrafted free agent, Cooper Rush, to replace Prescott following his injury on Sunday night. Dak is expected to be out 6-8 weeks after having surgery on a fractured thumb on his right hand.

Dak’s replacement, Cooper Rush, is one of the more inexperienced backups in the league having only one career start since being signed out of Central Michigan in 2017.

ESPN’s Stephen A. Smith believes the remedy to the Cowboys’ situation is to bring in a QB who hasn’t played at all since 2017, Colin Kaepernick.

“It will never happen, in my opinion,” Smith said But you might want to make that call to Colin Kaepernick. Might want to take that chance [and] find out. He hasn’t been around, but he’s a playmaker with his legs.”

Smith seems to believe the Cowboys won’t bring in Kaepernick because the state they play in, Texas, is too “patriotic.” “This is Texas,” Stephen A. said, “in the state of Texas, patriotic individuals that they pride themselves on being.”

Stephen A. is presumably referring to the many Americans who think Kaepernick’s decision to kneel for the national anthem is unpatriotic and therefore would not fly in a red state like Texas. While there is likely some truth to that, it ignores a more pertinent point.

RELATED: Michael Vick Weighs In On Whether Colin Kaepernick Can Be A Starting Quarterback In The NFL

Kaepernick certainly had his moment of success in the NFL. He burst onto the scene in 2011 taking the starting job from Alex Smith and leading the 49ers to the Super Bowl in 2013. However, Kaepernick’s progression as a QB stalled over the next two years, especially after coach Jim Harbaugh’s departure.

In his last year in the NFL prior to making headlines for kneeling on the sidelines, Kaepernick lost his starting job to career backup Blaine Gabbert.

But now 5 years later, Stephen A. Smith believes the only reason the Cowboys wouldn’t want him as their starting QB is because of how patriotic their fans are. Stephen A. apparently believes that after 5 years of not playing professional football Kaepernick is capable of going from a below average QB who couldn’t hold down a starting job on one of the worst teams in the league to a starting caliber QB.

We don’t have to ponder on how well how Kaepernick can play now, 5 years later. Kaepernick was given an opportunity to work out for the Las Vegas Raiders this offseason. He looked so bad NFL Hall of Famer Warren Sapp called it a “disaster.”

Ironically, Smith said back in May, “Are you sure he can be in the NFL? He hasn’t played since 2016. The last time we saw him he was 1-10 as a starter. The last three years in the National Football League when he was a quarterback he did not have a winning record.”

Smith then continued, “So I’m looking at NFL players and what I’m wondering about now is, have all of y’all been lying to me? Y’all constantly talk about how tough it is to play in the National Football League. How it’s the crème de la crème, the greatest football league in the world. And you’ve got the best athletes on the planet. And we just gonna act like this brother can walk on the field after a six year hiatus and still be that guy?”

Kaepernick has spent the last 5 years painting himself as a victim for being “blackballed” from the NFL, while also comparing the NFL combine to a slave auction and sabotaging opportunities to get back into the league.

Kaepernick is a fraud using a fake victim narrative to build a lucrative career as a faux activist. This lucrative career is built off of woke media personalities like Stephen A. continuing to play along with the idea that the only reason Kaepernick isn’t in the NFL is because he’s oppressed.

The Cowboys have not been the most well run NFL franchise in the past 20 years. But even they are not so poorly run that they would entertain Colin Kaepernick being their starting QB in 2022. Only someone like Stephen A. Smith could suggest something so foolish.

What do you make of Smith’s comments?

NEXT: Stephen A. Smith Does A Complete 180 On His Rachel Richardson Comments After BYU Investigation Finds No Evidence Of Racial Heckling