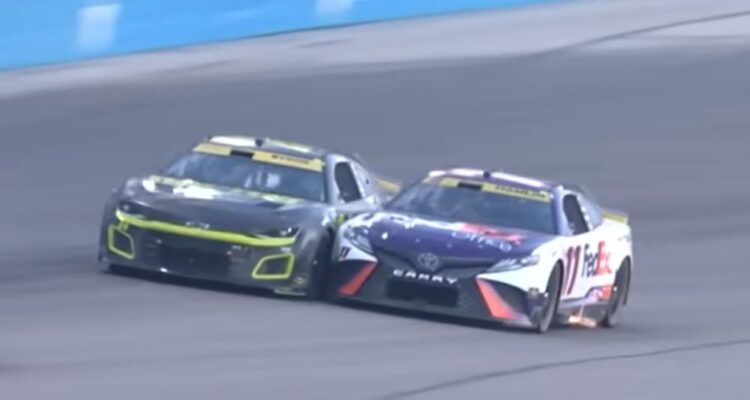 During the race, Hamlin and Byron made contact that resulted in Byron hitting the outside wall. Byron then came down the track to show his frustration.

The caution would come out later in the race after Martin Truex Jr. blew a tire and slammed into the outside wall.

Under the caution Byron would deliberately run into Hamlin sending him spinning into the infield grass.

As noted in the first video above, NASCAR sent Hamlin back to where he re-entered the race track after he was spun by Byron.

Given NASCAR clearly moved Hamlin back to where he re-entered the race track, Scott Miller’s explanation of the matter makes absolutely no sense.

When asked about Byron hitting Hamlin, Miller answered, “I’ll have to be honest with you, Bob, when we were in the tower we were paying more attention to the actual cause of the caution up there and dispatching our equipment.”

“The William Byron Denny Hamlin thing we had no eyes on. We saw Denny go through the grass and by the time we got a replay that showed the incident well enough to do anything to it, we’d gone back to green,” he said.

Miller concluded, “But I’m not sure that that issue is completely resolved as of yet. So we’ll be looking at that when we get back to work.”

First, to claim they had no eyes on the incident is absolutely unacceptable. How many NASCAR officials are present on the track and not one of them saw what happened?

Making this claim even more unbelievable is that the official NASCAR YouTube channel posted the in-car camera video of Byron hitting Hamlin. Clearly, they had video of it, and it shouldn’t have taken that long to find it.

As for the claim that they went green before reviewing the incident, that reeks of incompetence. They could have run another caution lap so you can review the footage and then make a ruling.

However, that claim doesn’t add up either. You know Joe Gibbs Racing and Hamlin’s team must have informed NASCAR he got run over by Byron and sent into the infield. We also have the USA broadcast even noting as the contact was made that Byron dumped Hamlin. They even had time to replay the footage from earlier in the race when Hamlin ran him up the track.

If the broadcast was able to make that determination it shouldn’t have been hard for NASCAR to do the same. The USA broadcast also having eyes on the incident blows up Miller’s claim that NASCAR didn’t.

Nevertheless, following the race, Byron claims he didn’t mean to spin out Hamlin, a comment as suspect as Miller’s.

Describing the first incident he told NBC Sports, “He ran me out of room, bent the toe link, and we’re lucky we finished. It was really hard contact. It wasn’t just like a light contact or anything like that.”

Moving to him spinning Hamlin out, Byron said, “I didn’t mean to, obviously, spin him out over there, but I’m obviously pissed off and just not gonna get run like that. We’ve always run so well or raced so well together so I don’t know what it was all about. I mean the 19 took his air away and he ran out of race track so he chose to run me out of race track completely.”

“And again, look it’s not like it was just light contact. I mean I thought we were going to be done,” he added.

When specifically asked if he ran into him on purpose off of turn four, Byron stated, “I don’t know. I mean, obviously, yeah. I went to go show my displeasure. I didn’t mean to him and spin him out. There’s a ton of guys that do this and go do something like that. I see it all the time.”

“I’m just not gonna get run like that. There’s really no reason. We’re running second and third, I think, and had a shot to win. Killed our car for sure. That was a bummer,” he continued.

Denny Hamlin shared his thoughts on Byron as well when he was asked about whether or not he was surprised that NASCAR didn’t penalize Byron for spinning him out.

Hamlin said, “Well, I think the crew chief was wanting something because he can’t — I mean I guess we can wreck each other under caution. I tried to wreck him, but it’s just —”

When asked what his conversation with Byron might be like, Hamlin answered, “I keep hearing these guys, but I’ll just add it to the list of guys when I get a chance they’re gonna get it.”

He elaborated, “It all just works itself out. We’ll be racing each other at some point and he’ll lose a lot of spots because he’s racing me. So it’s just — this is hard racing, obviously I’m fine with hard racing, but wrecking me under caution obviously is not what we bargained for.”

What do you make of NASCAR’s admission they didn’t have eyes on Byron spinning out Hamlin and then when they did review footage it was too late to do anything because they had already gone back to green?