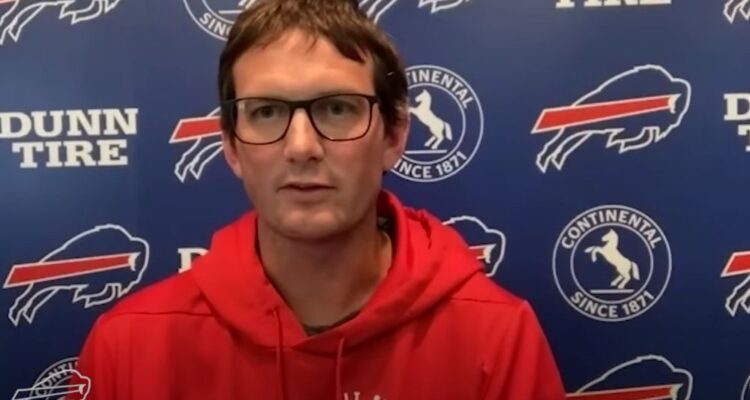 Buffalo Bills Offensive Coordinator Ken Dorsey was extremely angry after the Bills failed to convert on a fourth and goal late in the fourth quarter and then ran out of time just as they got into field goal range to potentially kick a winning field goal.

With less than two minutes to play in the fourth quarter, the Bills had the ball on the Dolphins’ 2-yard line and decided to go for a game-winning touchdown on 4th and goal.

Bills QB Josh Allen had his WR Isaiah McKenzie open. However, he underthrew the pass and it landed in the ground at McKenzie’s feet.

RELATED: Cardinals QB Kyler Murray Has ‘No Hard Feelings’ Towards Man Who Exuberantly Congratulated Him After Win Against Las Vegas Raiders

The Dolphins would get the ball, but the Bills defense would force the Dolphins to punt. The punt would go awry with the ball bouncing off a Dolphins player’s backside.

It resulted in the Bills being awarded two points via a safety as the ball bounced out of the end zone.

THE PUNT GOES OUT THE REAR OF THE END ZONE! #FinsUp

After the Dolphins were forced to kick the ball back to the Bills. Allen had a chance to redeem himself after the missed throw to McKenzie. He was able to march the team to just within field goal range, but the Bills were unable to snap and spike the ball before the clock ran out.

The Dolphins would secure the victory 21-19 and become one of only two teams to be 3-0 in the NFL. The other team being the Philadelphia Eagles.

After the game, video shows the Bills offensive coordinator Ken Dorsey going ballistic. He slams his headphones down onto his desk. He then throws his hat off his head as well. In a rage, he grabs at his tablet, which was sitting in front of him. He picks it up and then throws it down hard on the desk.

Next, he picks the tablet back up and repeatedly slams it into the desk. Another member of the Bills staff then alertly puts their hand over the camera so more of Dorsey’s rage isn’t shown.

Bills OC Ken Dorsey was not happy at the end of the game. pic.twitter.com/F7Jp5IMlFP

Dorsey addressed his fit of rage during a press conference with the media telling them, “It was an intense game. It was a passionate game. I’m up in the box, I’m watching my guys down there just give us everything possibly have in them with effort and from start to finish, playing 90 something snaps in a game.”

“It was a playoff atmosphere. A lot of credit to the Miami Dolphins and obviously we weren’t on the winning end of it so it’s frustrating,” he continued.

Dorsey then detailed, “I reacted that way and obviously that’s something I’m definitely gonna learn from. I don’t ever want to take the passion out of the game. We are all in this to win football games for obviously for the Bills, for our fans, and we’re gonna give them everything we got. ”

“It’s something I’m gonna learn from and make sure it’s a correct move forward,” he concluded.

What do you make of Dorsey reaction after the game and his statement addressing it?

NEXT: Tom Brady Says Ryan Fitzpatrick “Looks Homeless” After Fitzpatrick Explained Why Brady “Pisses” Him Off