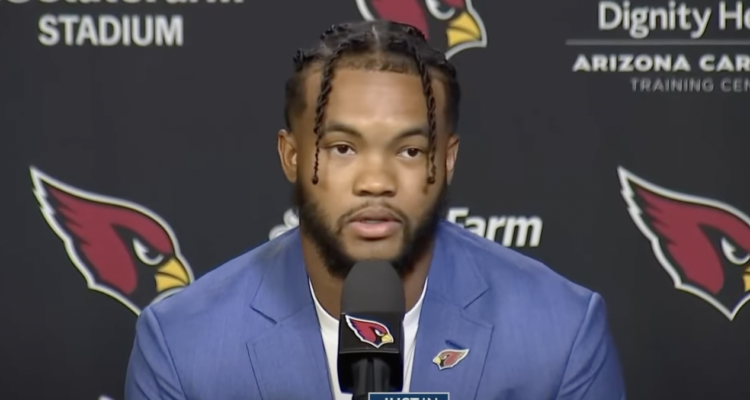 Confusion occurred this weekend when footage came out showing Arizona Cardinals quarterback Kyler Murray either intentionally being slapped or just accidentally getting hit across the face by a fan after winning last Sunday’s match against the Las Vegas Raiders.

The situation began when after the surprise, last minute win against the Raiders, Murray ran to the stands to see someone he appeared to know. Many Cardinals fans that were in close proximity to Murray can be seen reaching out to touch the player and give him a congratulatory pat on the back.

It’s during this moment that a man in a grey shirt can be seen reaching out to high five or slap his shoulder pads, however, as Murray was moving, the man’s hand hit his face.

As seen in exclusive video provided to TMZ, Murray appeared justifiably upset and confused having just been randomly hit, but walked away from the situation as teammates who witnessed the slap convinced him not to escalate it with the man as it appeared Murray went back to confront him.

The tweet below shows slowed down footage of the same scene, showing the man’s hand make contact with Murray’s face.

Murray goes back towards the man after the incident occurs, with the individual reaching out to pat Murray’s shoulder pads and apparently attempting to shake his hand, not noticing that Murray was visibly not pleased with what had happened just a moment prior.

Here’s a slowed down version of what happened between Kyler Murray and a fan after Sunday’s game in Las Vegas: Keep an eye out around the 16-second mark.

Great work by @CamCox12 who captured the entire ending on video.

As of today, it is still not entirely clear what the fan’s intentions were, but nonetheless a police report was filled for assault this week and authorities are investigating the situation provided with the footage and witness testimonies.

“We do not provide victim names however the event you are requesting is a battery call alleging a spectator at the stadium struck a professional football player,” said a Las Vegas Police spokesperson. “A crime report was taken, and the suspect has not been identified. This is an ongoing investigation.”

After word of the situation broke out, Cardinals head coach Kliff Kingsbury spoke on the matter, and assuming the slap had malicious attempt, called the individual “a lowlife” and that “I hope they arrest him and he gets fired and can never go to another game.”

Ironically, the one person in this situation who doesn’t appear to be escalating the situation, is of all people, Kyler Murray. When asked about the incident during a press conference later in the week, Murray seemed to be more level-headed about the issue.

“I don’t know if he didn’t know where he was, it was a pretty live game, Vegas is Vegas, I’m sure he was having fun,” Murray said to reporters. “But again I don’t know, I don’t think any player should be getting touched in that manner but no hard feelings. If I see him, I’d shake his hand. It is what it is.”

What are your thoughts after watching the video? Do you think this was a simple accident by an overly-excited fan or something else? Let us know in the comments.