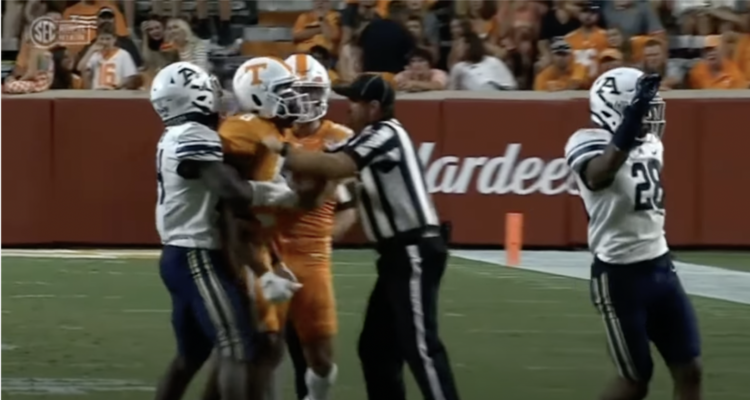 As seen in footage from the game below, Calloway can be seen throwing punches at Akron’s Tyson Durant, with just a little over 3 minutes to go in the third quarter while Tennessee was up 42-3.

Calloway hits Tyson several times before teammates got involved and separated the two.

According to some of the witnesses who were there, the Akron cornerback allegedly grabbed Calloway’s face mask right after he blocked downfield, obviously frustrating Calloway who then began to attack him.

Calloway was quickly ejected for the remainder of the game and received two unsportsmanlike conduct penalties while Tyson Durant, was also issued one unsportsmanlike penalty.

Tennessee’s head coach Josh Heupel spoke to the press after the game, expressing his disappointment in Calloway.

“Disappointing because it takes away from the rest of the football game,” said Heupel. “It’s not who we are or what we stand for in any area of our program. He’s disappointed too in what happened.”

“Teachable moment for everybody. Can’t do it. We’re not going to be able to do that and beat good football teams here as we get into conference play. You can’t do anything that takes away from the team that hurts the team,” he concluded.

Viewers and Tennessee fans alike went to Twitter to voice their frustration regarding how Calloway handled the situation, with most of them agreeing he did so poorly.

CBS Sports analyst Wes Rucker tweeted, “Every time you want to say Jimmy Calloway is about to turn the corner for Tennessee … something like this happens. Just totally lost it there.”

Austin Price, commentator for On3 Sports, also remarked “Last season a drop made Jimmy Calloway disappear. This season he tried to drop the Akron DB, and likely it will cause him to disappear.”

Tennessee trounced Akron 63-6 and moved to 3-0 on the season. Quarterback Hendon Hooker went 14 for 18 for 298 yards and two touchdowns. He also rushed for 24 yards.

Tennessee’s defense also punished Akron with four sacks and 11 tackles for a loss. They held Akron to 276 total yards.

Do you think this is will result in the end of Calloway’s time on the field? Let us know in the comments below.

NEXT: Gisele Bundchen Shows Support For Tom Brady And The Tampa Bay Bucs Amid Wild And Rampant Rumors Regarding Their Marriage