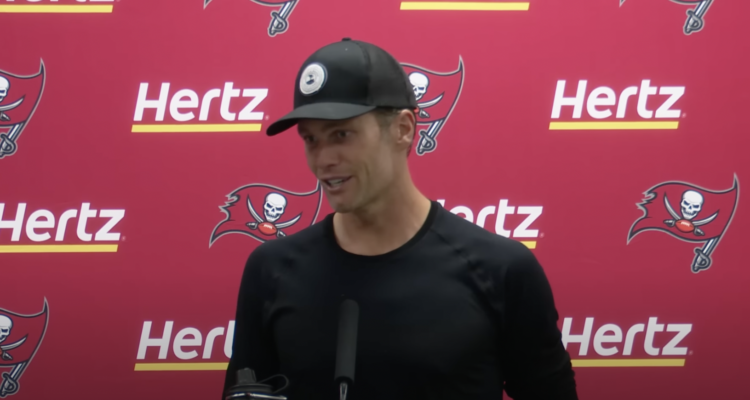 Tom Brady made his return from a short-lived retirement last night leading the Bucs to a 19-3 win over the Dallas Cowboys on Sunday night.

It was Bündchen’s first tweet in nearly three weeks. The post comes as a slight surprise after recent reports that the couple was having issues following Brady’s decision to return to the NFL after initially announcing his retirement this offseason.

RELATED: Tom Brady Says His Desire To Compete Is “Gonna Be Gone Soon”

Reports of the power couple possibly being on the outs started during Brady’s unexplained 11-day absence from the Buccaneers training camp. “It’s all personal, you know. Everyone’s got different situations that they’re dealing with,” Brady said in regards to his absence.

“We all have really unique challenges to our life. I’m 45 years old, man. There’s a lot of sh—t going on, so just gotta figure out life the best you can. It’s a continuous process.”

A report from Page Six that the couple was at odds over Brady’s decision to return to football “There’s been trouble in the marriage over his decision to unretire. Gisele has always been the one with the kids,” another unnamed insider revealed. “They had agreed he would retire to focus on the family, then he changed his mind.”

45-year old Tom Brady to Julio Jones: "I don't have that young arm like I used to."

This was before he hit Julio for a 48-yard deep shot later in the game.pic.twitter.com/cYA19VwYDo

The seven-time Super Bowl-winning QB returned from retirement following the 40 days in the wilderness that is normal life. On the eve of NFL free agency, Brady announced his return, two weeks later his head coach Bruce Arians announced his resignation and was replaced by defensive coordinator Todd Bowles.

Arians shot down reports that his resignation was due to tension between him and his future Hall of Fame QB.

“Heard some interesting things recently… The Tom Brady & Bruce Arians honeymoon was over in Tampa,” radio host Rich Ohrnberger tweeted. “The retirement announcement wasn’t because of the trouble seeing eye to eye on the offensive game planning, but the relationship was souring.”

Arians shot down these reports, “I mean, that’s such bulls–t‚” Arians told the Tampa Bay Times, “That’s what pisses me off.”

RELATED: Tom Brady Speaks Out on Absence: “There’s A Lot of S*** Going On”

The drama surrounding Brady’s retirement spread throughout the state of Florida. The Miami Dolphins were punished for tampering with Brady following the 2021 season.

There was an apparent plan to have Brady come out of retirement to join then Saints head coach Sean Payton in Miami. The plan was scrapped when Brian Flores filed a lawsuit against the NFL following being fired by the Dolphins. Flores claimed racial discrimination and that Dolphins owner Stephen Ross had incentivized him to lose games on purpose.

As a result of the tampering Ross was fined and suspended and the Dolphins lost multiple draft picks.

RELATED: Tom Brady Previously Described His Wife Gisele Bündchen As A “Witch” And Detailed How She Engaged In Numerous Rituals

After an offseason of retiring, un-retiring, tampering, and unexplained absences Brady is finally back to playing football. If Gisele’s tweet is any indication it appears that the 11 days Brady took off in the middle of training camp helped ease any tension at home.

Brady signed a 10 year $375 million dollar contract with Fox to call games whenever his career is over. So even if he retires for good after this year, he’ll be apart from of the NFL landscape for years to come.

What are your thoughts? Do you think Brady’s time on the field is coming close to an end? Let us know in the comments below.