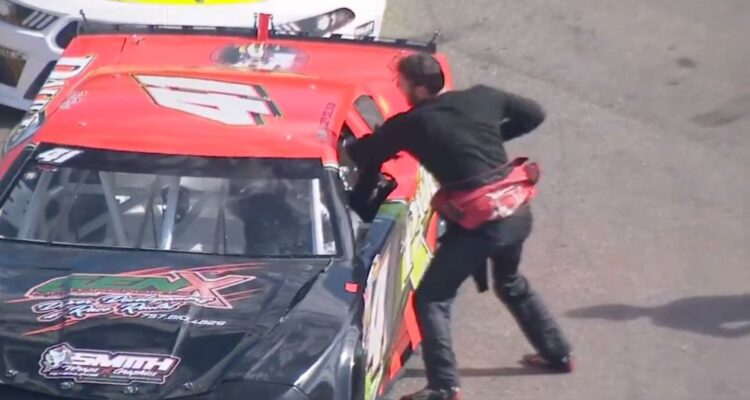 Late Model Stock Car Driver Andrew Grady was not happy after he failed to qualify for the prestigious ValleyStar Credit Union 300 at Martinsville Speedway and he took out his anger on rival driver Davey Callihan.

Grady’s hopes of qualifying for the 200-lap feature race were dashed when he wrecked during the first of four heat races. With three laps left in the heat race Grady can be seen losing control of his car and hitting the outside wall with the rear of his car. It then comes around and the entire front end smacks the wall.

He then rides along the wall for a number of feet before eventually coming to a stop. Brandon Pierce was also caught up in the accident although it’s unclear what exactly happened that led to the accident.

Grady clearly blamed Callihan for the accident. After he exited his vehicle he ran down the track and pointed the finger at the driver of the No. 41 car.

After the track was cleared and the green flag dropped, Callihan finished the heat race in 10th, which was the final transfer spot for the feature race. He drove all the way from shotgun on the field to qualify.

However, when he brought his vehicle down into the pits, Grady met him when he came to a stop and launched a flurry of punches at Callihan. He even kicked Callihan’s vehicle.

Tempers appeared to be cooling for a brief moment, but words were being exchanged between the two and Grady seemingly took issue at something and he leaped back towards Callihan’s car, but he was quickly picked up and hauled away before he could launch any other punches.

We’ve got tempers boiling over at @MartinsvilleSwy

Andrew Grady takes out his frustration on Davey Callihan after an accident in Heat 1@FloRacing pic.twitter.com/DeBkUQ27Xy

Following his attack on Callihan, Grady spoke to Racing America editor-in-chief Matt Weaver telling him, “He flipped me so I started Mike Tyonsing his head.”

“At the end of the day, we were really, really good, car was really fast, but man, you get these dumba**es that come in here and run with us and they have no business running a late model much less a lawnmower. He wasn’t close. He dive-bombed me. He hooked me. He wrecked Brandon Pierce in the process.”

Grady then reiterated, “And I wanted to talk to him and he flipped me off. So I started Mike Tyonsing his head. I mean you are in a big boy sport. When you wreck a man you can take a grown man a** whipping. That’s how I feel.”

Andrew Grady says Davey Callihan flipped him off when he went to talk so he decided to ‘Mike Tyson his head.’

He says there are dumbasses who have no business driving a Lawn Mower much less a Late Model at Martinsville.

Says that Callihan wrecked him and Brandon Pierce. pic.twitter.com/X1m99JRYOj

Callihan told Weaver a very different story, “Yeah, man, you know it’s for a transfer spot for Martinsville and from my perspective I was there. It was definitely close, but you can’t give an inch for a transfer spot when there are 95 cars so I had to take it.”

“Just hard racing and I do apologize to the No. 1, but we are fighting for our life out there. Just did what I had to do,” Callihan added.

When questioned about flipping off Grady, Callihan shot that down, “Nah, I never flipped anybody off. He just come started punching me inside the racecar. I understand he’s frustrated, but again it was for the transfer and we were fighting for our life.”

“It was for a transfer position at Martinsville. From my perspective, I was there. It was close.”

He says he didn’t flip off Andrew Grady and would have had a conversation about it.

“We were fighting for our lives out there.”

Grady also expressed his frustration to Race22.com telling the outlet, “NASCAR has taken one of the most prestigious races in this country and they turned it into a demolition derby. I can’t even really explain what happened. We were in the transfer spot and I get it, but he didn’t even try and make the corner. He just drove through me. And I was going to talk to him and he flipped me off. So I started Mike Tyonsing his head.

“Unfortunately, we locked tires and it wheel hopped on me and got them up the hill there. That is what it is. Obviously, he wasn’t too pumped on it so he decided to throw a few cheap shots in the car, but that’s water under the bridge. We’re going to race the ValleyStar 300. So that’s going to be really cool,” he explained.

Callihan ended up finishing the ValleyStar Credit Union 300 in 22nd. Peyton Sellers, who finished second in a controversial ruling by NASCAR for the NASCAR Weekly Series Championship, won his first grandfather clock.

What do you make of Andrew Grady’s attack on Davey Callihan?

NEXT: Peyton Sellers “Caught Off Guard” After NASCAR Axes Two Races From August And A Race At Motor Mile To Award Layne Riggs The NASCAR Weekly Series Championship