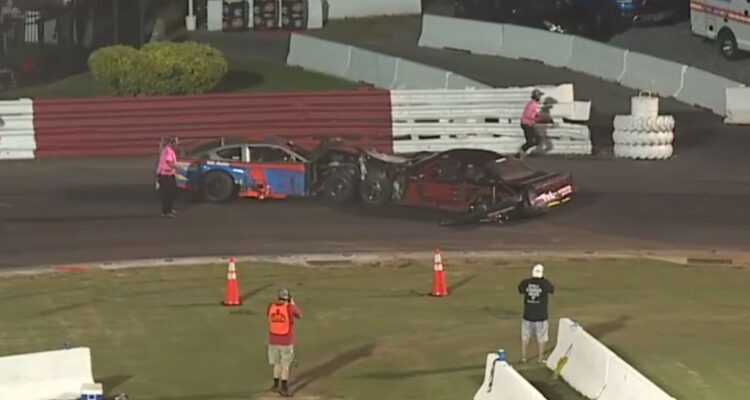 The final race for the Street Stock Series at Bowman Gray Stadium did not disappoint fans as it turned into a demolition derby following a brutal wreck on the last lap between the two race leaders.

Gerald Robinson Jr. took the green flag with two laps to go with Christian Joyce close behind him in second. Joyce poked his nose under Robinson in the north turn or turn 3. By the time they came out of turn 4 and into the straightaway, Joyce got his nose up to Robinson’s door.

Going into the south turn, Robinson cut down on Joyce sending his own car sideways. The move appeared to have worked for a brief instance as Robinson edged away from Joyce.

However, Joyce still got his nose to Robinson’s quarter panel. When they came to the north turn, Joyce drove it in hard and completely ran over Robinson’s driver side. The two would eventually spin with Joyce coming to a stop in turn 4 while Robinson attempted to finish the race.

Brutal wreck at Bowman Gray between Gerald Robinson Jr. and Christian Joyce racing for the lead on the final laps. pic.twitter.com/FTqqoKpaR2

After the yellow flag was shown, Robinson returned to the north turn where all hell broke lose and the race became anything but, devolving into a demolition derby. Robinson stopped his car feet from Joyce’s.

It turns into a demolition derby after the caution waves. pic.twitter.com/uZFAphZkwJ

RELATED: After A Huge Wreck During Bowman Gray Stadium’s Chain Race, Huge Brawl Breaks Out On The Racetrack!

Here’s another angle at the accident and the subsequent demolition derby.

Track officials would end the race, throwing the checkered flag and awarding the victory to then third place driver Nate Gregg. Robinson would eventually finish in 7th with Joyce finishing towards the tail end of the 18-car field in 15th.

In a post-race interview, Gregg had harsh words for Robinson, who had passed him earlier in the race, saying, “Sorry for Gerald Robinson, you tried to take a man on the start, but karma’s always come back and bite you in the a**.”

While Gregg claimed victory it wasn’t enough to beat out his father, Billy Gregg, for the season championship. Billy Gregg finished fourth and secured the championship with a total of 784 points compared to his son’s 772 points.

Joyce ended up finishing fourth with 610 points for the season while Robinson was 15th with 358 points.

RELATED: Fireworks Erupt At Bowman Gray Stadium’s Night Of Destruction As Nick Wall Hunts Down Nate Gregg After Being Spun While Leading

The Law Offices of John Barrow Street Stock Series was one of the most entertaining divisions throughout the season and it was filled with drama especially involving the Gregg family.

Probably the craziest moment came back in July when Nick Wall was dumped by Nate Gregg during a restart. Wall was not happy with Gregg dumping him and decided to seek revenge hunting down Gregg and ramming him in the rear quarter panel under caution.

However, that pound of flesh wasn’t enough and Wall continued to circle the track, pursuing Gregg through the infield and eventually slamming him hard in the door.

The racing action at Bowman Gray Stadium will return in April 2023. Nate Gregg is expected to move up to the Modified division, which crowned Tim Brown as its champion.

What do you make of this brutal wreck and the ensuing demolition derby?

NEXT: Multiple Suspensions Doled Out After Brawl Erupts At Stafford Motor Speedway